For our purposes, "railroad" has all of the first three meanings stated above.

A railroad is a linear way (path, line) for the transport of goods or people along routes using wheeled vehicles typically coupled together to create a train. The path is usually called a track and, except in the earliest times, consists of steel rails. The wheels of the vehicles (see rolling stock) are almost invariably steel too, as a steel-steel interface (wheel to rail) exhibits lower frictional resistance than other materials, such as rubber. Nevertheless, trains are moved through traction power, since it is the friction between the rails and wheels that enables a train to move (or to stop). There is thus a necessary trade-off between reducing friction and improving traction.

Tracks in this context are typically two parallel steel rails held at constant separation (called gauge) by being fastened to wooden, concrete or steel ties (or sleepers) embedded in ballast (typically crushed stone) or by being embedded in concrete (slab track). The wheeled vehicles (locomotives and railroad cars, collectively rolling stock) have no steering mechanism but are guided by the tracks on which they run. We will have more to say about tracks a bit later on under Railroad Infrastructure.

A train consists of one or more powered vehicles (locomotives) moving one or more unpowered vehicles (railroad cars) used to transport people (passenger cars), goods (freight cars) or powered or unpowered service vehicles (e.g., maintenance-of-way (MOW), office facilities or worker lodging). In general, a train is made up of these various kinds of vehicle so as to move as a unit. Vehicles are coupled together to form a train and later may be uncoupled and then coupled into another train for another purpose or destination. The collection of vehicles constituting a train is called the consist.

A trainset is a group of vehicles that are semi-permanently coupled to operate as a unit. Trainsets most often constitute passenger trains, especially on high velocity rail lines where consistency is very important. A trainset might be comprised of one or more powered vehicles along with unpowered cars that serve particular functions, such as business class, dining cars, sleeping cars, entertainment cars, and so on. A trainset is usually designed and built so all components operate together in a well-defined manner. Comfort of passengers and their safety are paramount. A trainset also facilitates the scheduling of trains without the need to marshal all the required cars into a train. One need only specify the trainset rather than the consist.

A model railroad is a rail transport system designed and built on a reduced scale so as to make use of limited space and financial resources. Model railroads are usually built to mirror full-scale railroads in quite exacting detail, not only of the track layout but also of the general terrain, non-rail roads, automobiles, buildings, trees, waterways and myriad other details. The Shannondell Model Railroad is an HO-scale (1:87) model railroad and is described and pictured in some detail elsewhere on this website (see in particular Layout).

A railroad organization is an entity that is established to create, operate and maintain a railroad for economic gain or other benefit.

If the organization is a commercial enterprise, then its objective will be to provide a service to some other group of people or organizations (customer base) with the aim of earning a profit. This means the customer base must be large enough (or wealthy enough) to produce a revenue stream sufficient to cover the cost of creating, operating and maintaining a railroad. In many cases today, government support may be called for if a railroad is considered a "public good".

For something to be a public good, it must meet three criteria: (a) be of benefit to the general population, (b) be non-rivalrous (no diminution of supply relative to consumption) and (c) non-excludable (the good is available to the entire population regardless of ability pay). "Good" means product, service or resource.

Railroad companies generally do not constitute a true public good in that they are somewhat rivalrous and the service is not "free" even if the listed price is the same for everyone. Many countries do, however, consider railroads sufficiently like a public good that they provide substantial financial assistance to insure the population in general has access to railroad services. We discuss this a bit more under Common Carrier, later on.

If the organization is a non-commercial enterprise, such as a museum or historical organization, or a tourist railroad, it will have a clientele different from (but likely overlapping) that of a commercial enterprise. It seems that people in all walks of life have a fascination for railroads and enjoy observing and riding them, even if they do not use them for commerce.

Regardless of the type of organization, revenue (from whatever source) must exceed expenses or the organization will fail.

​Railroads are transport organizations (see Transport). Their purpose, therefore, is the movement of entities (freight or goods and people) between two points in space-time. As such they are classified as carriers, a topic we shall discuss presently.
Owning Entity

An entity that owns a railroad may be either private​ or public. A private entity could be any of a number of types, including sole proprietorship, partnership, private company or public company. In effect, ownership rests with one, two or a few, or many entities.

A sole proprietorship is an organization with a single owner that is solely responsible for all liabilities, for adherence to all laws, rules and regulations, and that reaps the rewards (if any, after taxes). The proprietor may employ people, enter into contracts, and perform other acts to which a transport organization is entitled.

A partnership is an organization with two or a few owners. A partnership is usually formed through a written agreement that spells out the duties and privileges of each partner. Partners share in the liabilities and rewards of the partnership, although not necessarily equally. Partners may be classified according to their contribution to the partnership, either at formation or afterward according to their relative success in generating income. Other classes of partner are also possible.

​A company is an organization with many owners [see 15 U.S. Code § 80a–2]. A company is often formed for the purpose of raising large amounts of capital for investment. A railroad company definitely has the need for sizable amounts of initial capital, considering the cost of right-of-way, trackage and rolling stock.

​A company may be private or public. A private company is owned by a relatively small group of investors who purchase or sell shares of stock, each share of which represents some percentage ownership of the entire company. Trading in the company's stock is done privately (between company and investor or between investor and investor). A public company is one whose investors are members of the general public who are willing to invest in the company through purchase of stock.  A public company's stock may be traded (bought or sold) through an exchange. If it is traded via an exchange, the company is called a publicly traded company.

​Most railroad organizations are publicly traded companies. Since railroads are, at least in the United States, not considered public goods as discussed above under Commercial Enterprise, and since they need to operate under law, they are classified as carriers, specifically common carriers.

​What is a Common Carrier?

A common carrier, in common-law countries (e.g., United States, Australia), is an entity that transports goods or people for or on behalf of any entity and is responsible for any possible loss of the goods or people during transport.

There are many kinds of common carrier including air, rail, public road, water, telecommunication, power supply, pipelines, and so on. Here we are only interested in railroads, but other types of carrier may be required in order for the railroad to operate.


Other Types of Carrier

Private carriers provide transportation services only to themselves. For instance, a car rental company may also operate a car carrier service to move its cars among rental offices. The rental company is not obliged to carry cars or other goods for any other entity.

Specialized carriers are those designed for some special purpose, such as military transport, particular materials transport (e.g., nuclear waste, food grade materials). Such carriers may, at the same time, be either common, contract or private carriers.

Other Legal and Regulatory Issues

Railroads are subject to a wide variety of legal and regulatory matters that, in most cases, limit, restrict or control the way the railroad may operate. The first, the notion of carrier, we have just discussed. Legal and regulatory matters may relate to standards (such as track gauge, track manufacturing, curvature, etc.), the type and or quality of service, safety matters, personnel issues, financial matters and so on. Some topics will arise as we discuss various aspects of building and operating a railroad. But most of these topics are beyond the scope of this website.

In the United States, railroad companies are classified according revenue earned. After the Interstate Commerce Commission was abolished in 1995, the classification of railroads became the responsibility of the Surface Transportation Board (STB). There are three classes,  based on gross revenue per annum. The three classes as of 2019 are:
​
The STB continues to use designations of Class II and Class III since there are different labor regulations for the two classes compared with Class I. The classes are restated periodically to adjust for inflation and other factors. Class I and Class II railroads are listed in the following two tables. 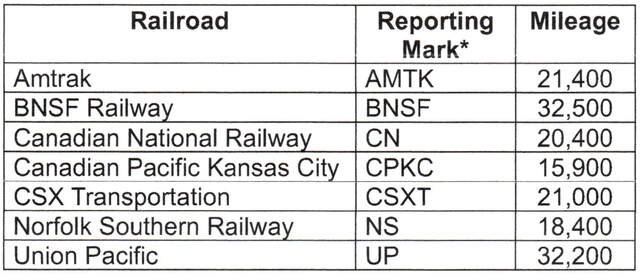 Class I Railroads that operate in the United States 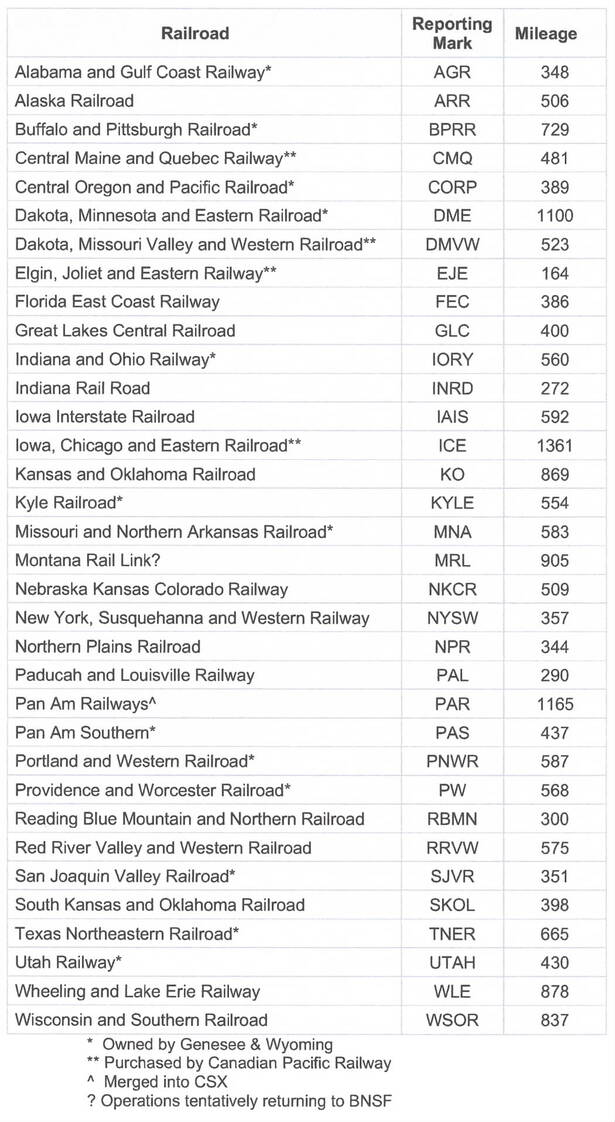