Batteries are devices that store electrical potential for later use. We are all familiar with lead/acid batteries used in automobiles, trucks and the like. The problem with this type of battery is that they are heavy and have a low specific energy (energy per unit mass). They also pose an environmental hazard due to the lead used.

However, there are many other types of battery with varying performance characteristics depending on the chemistry used (e.g., lithium ion), packaging, etc. There are two broad classes of battery for electrical energy storage, primary and secondary. Primary batteries are designed for use until exhausted and then discarded (think of the common AA alkaline battery). Secondary batteries are designed to be recharged and reused (Ni-Cd batteries, Li-ion batteries and many others). It is this type of battery of main interest to railroads.

​Wabtec Corporation has introduced a battery-powered locomotive called FLXdrive. This locomotive carries enough power to operate as a freight locomotive or switching locomotive, using a battery pack containing some 20,000 lithium ion cells that collectively produce 2,400 kilowatt hours of electricity to power four traction motors (two on each 3-axel truck). The locomotive is designed to work together with standard diesel-electric units to reduce environmentally hazardous emissions, reduce diesel fuel consumption and pull a train over considerable distance once operating momentum has been achieved. The locomotive can produce a full 4,400 horse-power output for 30-40 minutes. The photo below shows such a locomotive being "fueled" from track side. Regenerative braking is also employed to recharge batteries during operation (see also Wabtec).
​ 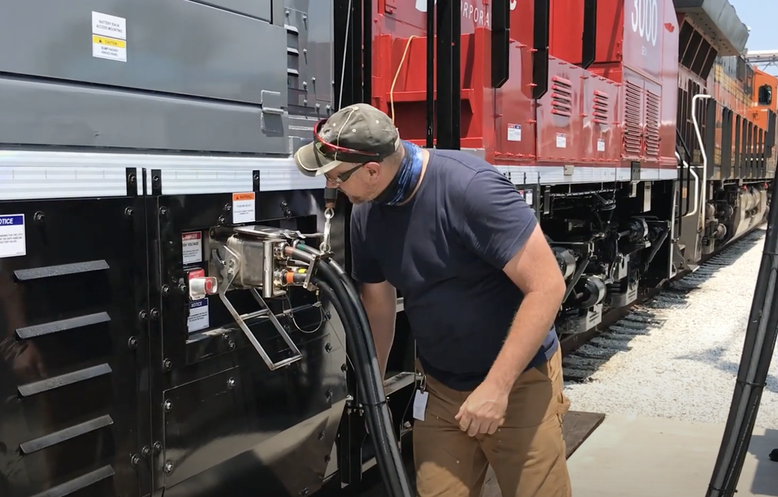 As progress is made in battery storage of electric power, it may soon be possible to operate electric locomotives over quite long distances (see Environmental and Energy Study Institute​). In the meantime, hybrid schemes in which a combination of battery power and diesel-electric power or battery-electric-multiple-unit (BEMU) motive power has been developed and is being installed by various railroads, including BNSF Railway (BNSF), Union Pacific Railroad (UP), Société Nationale des Chemins de fer Français (SNCF), Chiltern Railway (CH), and others. These BEMUs will improve operating efficiency and reduce environmental degradation while proving the use of battery-electric locomotives. 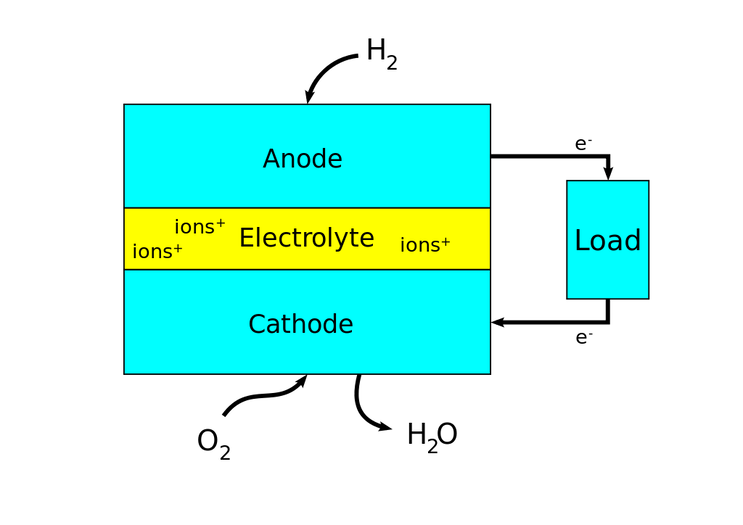 ​Two hydrogen-powered units are shown in the following figures, one manufactured by Alstom and one by Siemens. There are a number of other similar products on the market.
​ 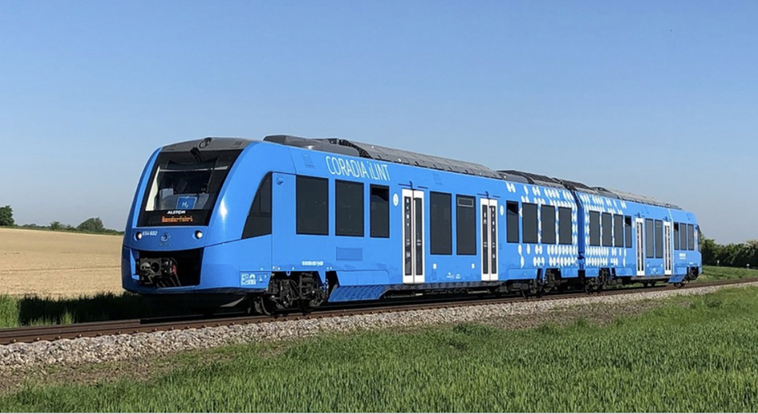 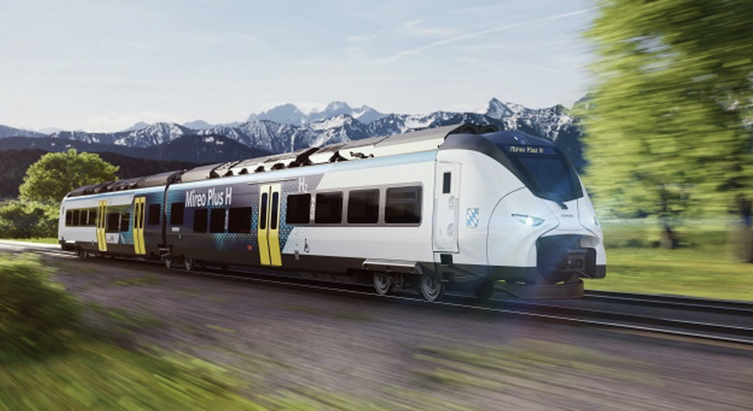 Siemens Mobility Mireo Plus H hydrogen-fueled train
Nuclear Power
​
​Nuclear power has also been considered for use on railroads. An article in Life magazine (June 21, 1954, pp. 78-79) described in some detail a nuclear-powered locomotive (never built) that could improve operating efficiency and require refueling much less often than conventional locomotives of the day.

​A U.S. patent was issued to one L. B. Borst (University of Utah) on March 31, 1964, titled Nuclear Reactor for a Railway Vehicle, U.S. Patent 3,127,321. No further development has been reported. A more recent U.S. Patent (US20090283007A1) issued to W. G. Taylor, "Nuclear Locomotive", describes the use of nuclear energy to power a maglev (magnetic levitation) locomotive. No further work has been described based on this patent.

Russia is reported to have designed a nuclear-powered locomotive, but this too has evidently not produced anything operational.

Bill Lee has written a piece (November, 2013) taking a very pragmatic view of nuclear-powered locomotives and concludes they are quite impractical. A more recent review of "atomic trains" provides a good summary of the pros and cons of the idea. In short, the weight of necessary shielding, cooling mechanisms and other issues makes nuclear-powered locomotives unrealistic at present. Nevertheless, fusion (rather than fission) nuclear power may one day change this view.

Magnetism as a natural phenomenon has been known for thousands of years from materials such as lodestone (an iron mineral). Magnetism as a scientific field of study began around 600 BC and was developed much more fully beginning around 1800 by several scientists studying what is now called electromagnetism.

Although magnetic levitation as a physics concept has been known since about 1700 (perhaps earlier), its use in transportation is much more recent. The two important aspects of this concept are the lifting forces and the stabilization forces. It is fairly easy to demonstrate levitation using two permanent magnets with north and south poles symmetrically opposed. It is much more difficult to prevent them from spinning or collapsing. A good discussion of these matters may be found in this video (11:33 minutes).

The first commercial application of magnetic levitation (maglev) was the Birmingham, UK Maglev (1984–1995). This was followed by the Berlin M-Bahn (1989–1991, which ended upon the fall of the Berlin Wall) and the Shanghai Maglev (opened in 2004). This line, 30 km (18.6 miles), connects Shanghai Pudong International Airport and Longyang Road Station and operates at a maximum speed of 430 km (267 miles) per hour. There are also maglev lines in South Korea. For a review of railroading there, see SKRail (16:51 minutes)

A new maglev line is under construction in Japan (Chuo Shinkansen) which will operate at up to 500 km/hour (310 mph). The first phase of construction, from Tokyo to Nagoya (213 miles or 343 km) is expected to be completed by 2027. The travel time is expected to be about 40 minutes. Compare this with the time required on the Tokaido-Sanyo Shinkansen high speed line at 112 minutes.

In the Unites States, a maglev line linking Washington, DC with New York City is under development (see NEMag), but progress is painfully slow. Northeast Maglev, LLC was formed in 2010 and has been working with various governments and government agencies (e.g., Federal Railway Administration) to satisfy a plethora of laws and regulations before any construction can begin. The first phase is to connect Washington, DC with Baltimore, MD (mostly underground), but there are no projected start or completion times for actual construction. It must be noted that the trains and associated technology are to be acquired from Central Japan Railroad Company (JR Central), so no technical hurdles exist, only political ones.
​
Hyperloop Transportation

The basic concepts of magnetism and magnetic levitation were mentioned above. One major hurdle to high-speed train travel, aside the issues of friction and guidance mentioned above is that of air resistance (friction). The greater the velocity, the greater the air resistance. This was understood at least by the end of the 16th century. In 1825, the proprietors of The London and Edinburgh Vacuum Tunnel Company published a stock offering and prospectus in The London Mechanics’ Register (No. 13) Saturday, January 29, 1825, 205-207. This was a two-channel vacuum tunnel to carry goods between London and Edinburgh based on a proposal by George Medhurst made in 1799 (see Atmospheric Railway).  Although models were built, nothing further came of this venture.

Robert H. Goddard (Bio and Early Ed), the father of modern rocketry, while in college at Worcester Polytechnic Institute (1904-08), conceived a plan for cars, suspended and moved by means of electromagnets, to travel within a vacuum tube. This idea was later the subject of a U.S. Patent 2,511,979, filed 1945 May 21 and granted to his wife Esther C. Goddard 1950 June 2.

​No further work on this concept seems to have been done until Elon Musk (Bio) published a white paper entitled Hyperloop Alpha (H Alpha, 58 pp.); 2013 August 12. Eight companies in Canada/France, India, Netherlands, Poland, Spain and the U.S. have since been founded (between 2013 and 2017) to develop the technology. The most advanced firms seem to be Virgin Hyperloop and Hyperloop Transportation Technologies (HyperloopTT), although Virgin Hyperloop has dropped passenger transport in favor of freight.

In 2016, Virgin Hyperloop launched the Hyperloop One Global Challenge (VHOGC) seeking locations where development and construction of the world’s first hyperloop systems might occur. Ten winners were announced in 2017 as shown in the table below.

Table showing top 10 routes proposed in the Hyperloop One Goal Challenge
Several projects are underway to actually construct the first commercial hyperloop systems. Two of these are in the United Arab Emirates. One, being built by Hyperloop Transportation Technologies (HyperloopTT) will connect Abu Dhabi and Al Ain (~100 miles). Another, being built by Virgin Hyperloop, will connect Abu Dhabi with Dubai (85 miles) (Gulf News, October 31, 2021 07:18) with travel time of 12 minutes. This project is expected to be completed around 2025.

It remains to be seen if hyperloop will become a force in transportation, especially for distances less than about 900 miles, above which air transport would appear to be a better option (except for the environmental damage it causes).