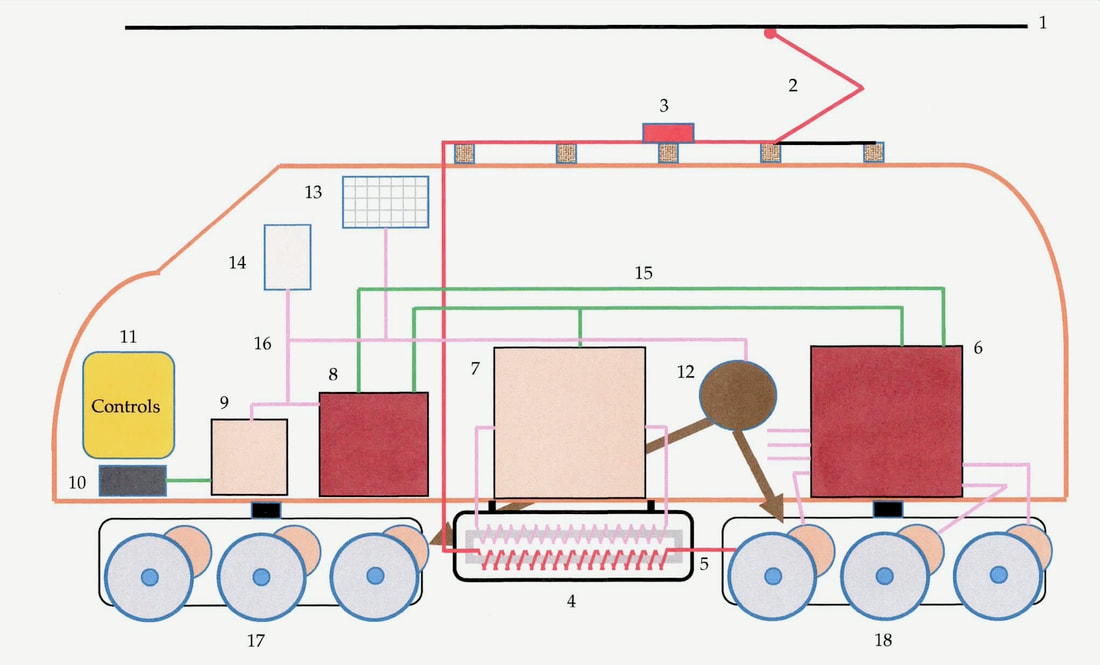 Schematic diagram of an electric locomotive
A description of the numbered components of the above diagram is given in the following table. ​ 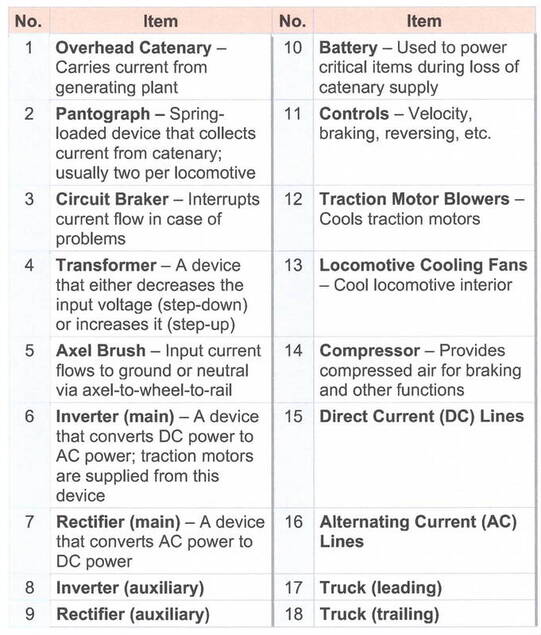 Key to electric locomotive diagram
Electric locomotives usually obtain electric power from overhead catenary lines or from a third rail. It is also possible to use batteries, but the technology is not quite ready for very long runs at present. We here limit the discussion to supply of electricity power to a locomotive via overhead catenary lines. These lines operate at various voltages in different parts of the world, but an increasingly popular standard is 25,000 volts (25 kV) at 60 Hertz. Nevertheless, voltage ranges from about 600 V to 25 kV. Some lines are DC, but the higher voltage lines are AC.

Needless to say, the electric locomotive must be designed to operate on the lines available (or the railroad must generate the electric energy itself). The incoming electric power passes through a transformer that either steps down or steps up the voltage as needed. The current at the proper voltage then passes through a rectifier that converts alternating current to direct current so that the voltage can be smoothed and steadied. An inverter is then used to convert back to alternating current since the traction motors run on AC (as do other functional elements such as blowers, fans, compressors and controls). A battery back-up system may need to be charged via DC, necessitating an auxiliary rectifier. The battery back-up enables critical control systems to operate in the event of loss of main power.

The locomotive is moved using traction motors connected to axels in the leading and trailing trucks (bogies). We will have more to say about trucks later. In the illustration above, the locomotive has two trucks of three axels each. All are shown as powered in the illustration, but sometimes the middle axel in each truck is unpowered. The choice depends on the purpose of the locomotive. The traction motors may be of different designs. At present, they are likely to be 3-phase AC motors. Other designs have been used, including one in which the axel served as the rotating shaft of the motor. Today, most traction motors are geared to the axel, one motor to each axel. An electric locomotive is illustrated below. 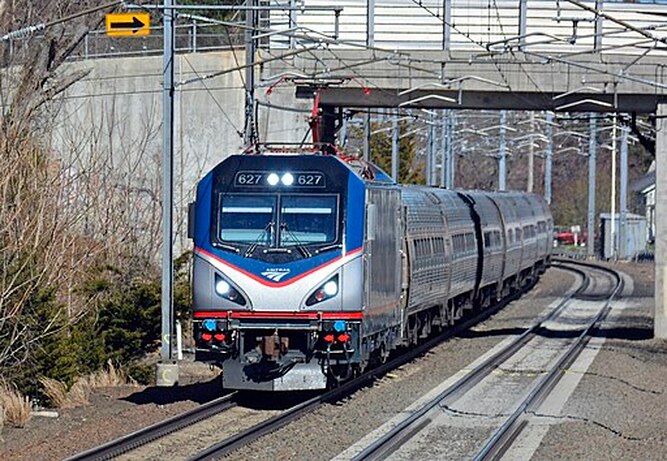 Speaking of independence, the following table compares the three major sources of motive power. Obviously, none are independent of fuel source, but both steam and diesel or diesel-electric are more nearly independent compared with electric employing either overhead catenary or third rail delivery of electric energy. Nevertheless, continued research and development may soon permit electric locomotives to replace diesel-electric (see Other Motive Power, below).
​

Comparison of three major sources of motive power on four dimensions
​Electric locomotives are more likely to be used on freight routes that have consistently high traffic volumes, or in areas with advanced rail networks. Power plants, even if they burn fossil fuels, are far cleaner than mobile sources such as locomotive engines. The power can also come from low-carbon or renewable sources, including geothermal power, hydroelectric power, biomass, solar power, nuclear power, hydrogen and wind turbines. Electric locomotives usually cost 20% less than diesel locomotives, their maintenance costs are 25-35% lower, and cost up to 50% less to operate. In addition, they are the most environmentally sound locomotives in operation.
​