​If only it were merely a matter of connecting two points by railroad track, but it is not. Trains often need to negotiate curves, move from one track to another, or need one track to cross over another track. So special sections of track must be designed and installed to permit such movement.

The simplest deviation from a linear track is a curved track. Curves introduce a number of problems not encountered in straight track. Speed, radius, cant, and centrifugal force all come into play. 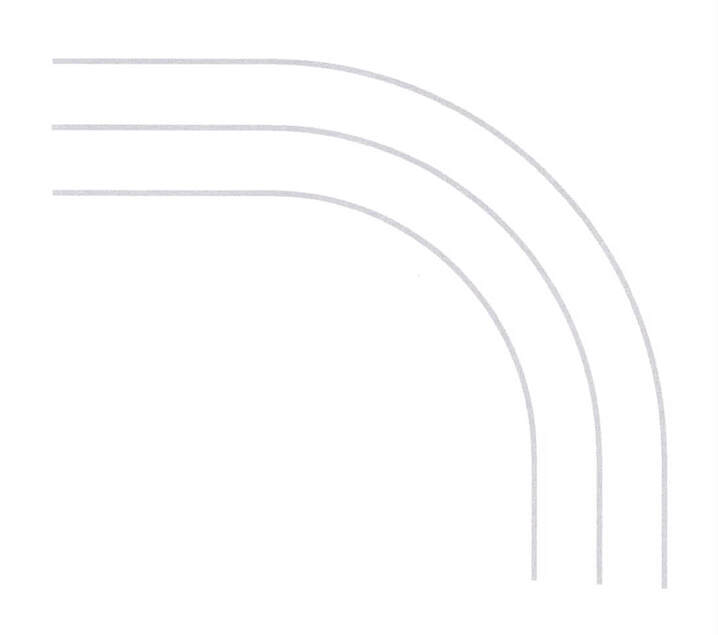 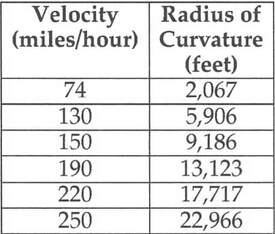 Table showing the relation between train velocity and radius of curvature of railroad track
​This table also takes into account cant or superelevation, a measure of the amount of inclination from the inside rail to the outside rail in a curve. In the table, cant is assumed to be 160 mm (6.3 inches). The purpose of cant is to balance the force exerted on the two rails within a curve. Cant is beneficial for fast-moving trains (high centrifugal force), but is detrimental for slow moving trains (lower centrifugal force). This problem is sometime corrected for by building “tilting” trains (usually fast passenger trains).

Other issues with curves include the limits placed on curvature by the couplings of the rolling stock. Most coupling designs place significant limits on minimum curvature if damage to the couplings is to be avoided.

As a train enters or exits a curve in the track, there should be a section of straight track at either end to facilitate curve negotiation. In the following illustration, the radius of curvature of the two curved sections of track is 1000 feet. The length of straight track is also about 1000 feet. Ignoring this precaution may result in derailment. Why? 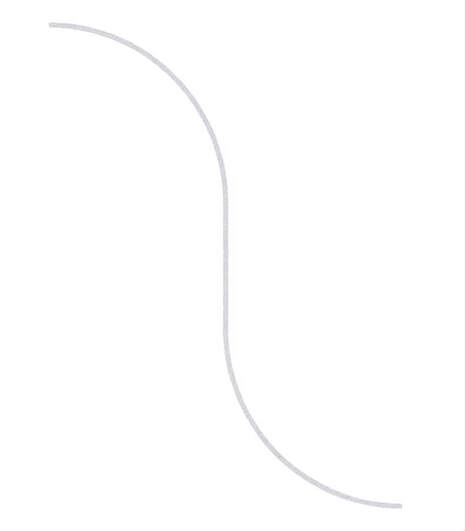 Vertical curves (inclination followed by declination) are of less concern than the other issues we have discussed, but not negligible. Think of this issue as a transition curve in the vertical plane rather than the horizontal plane, with small changes in grade.

​A railroad turnout, also called a switch or points, is a mechanical unit enabling railway trains to be directed from one track to another. Turnouts are both handed (left or right) and directional (said to be facing or trailing). This is illustrated below. ​ 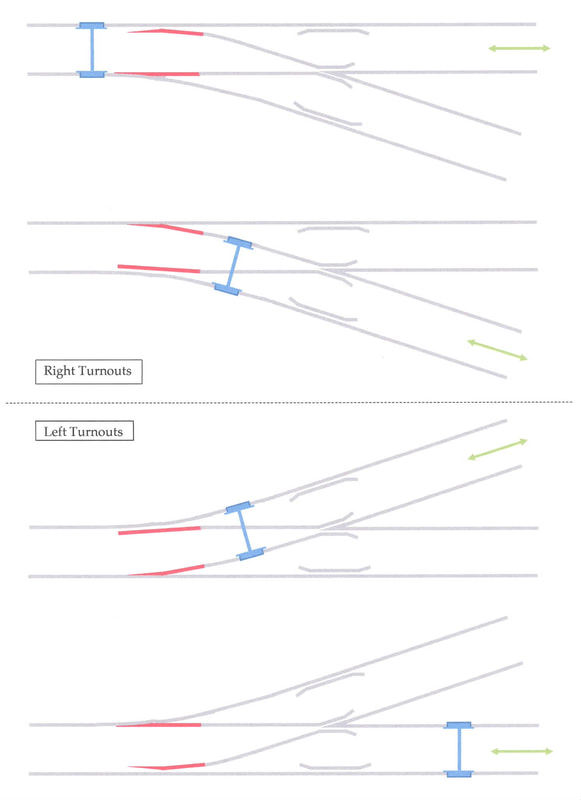 Illustration of turnouts with the upper pair right-hand and the lower pair left-hand
A turnout consists of a pair of interlocked, tapering rails, called points (switch rails or point blades), lying between the diverging outer rails (the stock rails). Points are shown in red in the above diagram. These points can be moved laterally, in tandem, into one of two positions. In the top example in the above illustration, the points, approached from left, will direct a train along the straight track. In the second example, the points will direct a train along the diverging track (toward the right). A train moving from the left toward the point blades (i.e., it will be directed to one of the two tracks, depending on the position of the points) is said to be executing a facing-point movement or is traveling facing the diverging tracks. If a train approaches from the right (on either track) it is said to be traveling in the trailing direction.

​The bottom two examples in the above illustration are left-handed turnouts.

​Notice that if a train is approaching from the right side of the illustration, it can continue only on the straight track, regardless of the point settings. Why is that so?

One other aspect of the above illustration is the short bits of rail seen near or opposite a gap in a rail. These are called guard rails and serve to help insure wheels continue on the proper line as they travel over the point rails (two inner rails that end in a point). The complete assembly of the point rails and wing rails is called a frog (see illustration below).The frog also helps reduce wear on these more delicate parts.

Illustration of a frog (from AGICO Group) showing the components, usually cast as a unit.
Turnouts are numbered (e.g., #4, #5, #6,. ...#18, #20, #24) to differentiate the maximum velocity a train may travel in order to diverge via the turnout. The lower the turnout number, the smaller the radius of curvature of the diverging track, thus the slower one must travel through the turnout. The numbers signify the number of units of linear run per unit of divergence. For instance #24 means the turnout has 24 units of length (run) for 1 unit of divergence; a very shallow curve used on high-speed train lines. The following diagram illustrates how turnout numbers are measured.

The turnout number indicates a ratio of X/1. X will be a number of units equal to the turnout number (e.g., #8). X is measured along the center lines of the through track and the diverging track, from the heel joint of the switch point adjacent to the outer rail of the through track. X will be the distance along the center lines to the point where the center lines are separated by 1 unit of distance (arrow).
A useful rule of thumb says the velocity to safely take the diverging track is v = 2N, where N is the turnout number.
​
Turnouts may be assembled in the field (see this video - 19:42 minutes), but they are more likely to be factory fabricated and moved by rail to the installation site. This video (15 minutes) shows the installation of a pre-fabricated turnout on the Florida East Coast (FEC) Railroad.
​
Crossover
​
A crossover is a pair of turnouts that connect two adjacent tracks, allowing a train on one track to cross over to the other. Like turnouts, crossovers can be described as directional (facing or trailing).
​

A typical crossover
When two crossovers are present in opposite directions, one after the other, the four-turnout configuration is called a double crossover, that allows trains traveling in either direction on one track to cross over to the other track. If the crossovers in different directions overlap to form an X, it is named a scissors crossover, or a diamond crossover. This makes for a very compact track layout at the expense of using a level junction (see a bit later).
​ 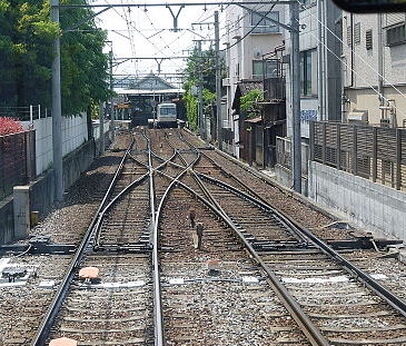 An example of a scissors crossover
​Wye Turnout

A wye turnout (Y points) has trailing ends which diverge symmetrically and in opposite directions (left and right). The name originates from the similarity of their shape to that of the letter Y or a similar configuration seen in the hoof of a horse. Wye turnouts are usually used where space is at a premium. Ordinary turnouts are more often associated with mainline speeds, whereas wye turnouts are generally low-speed yard turnouts or serve to provide access to single track bridges or tunnels. See The Amazing Feather River Railroads and the Keddie Wye video for an interesting example of a wye.

Other Types of Turnout and Crossover

Triple turnouts and multiple crossovers are not unknown. But as the complexity increases so does the risk of accident and the effort to maintain them.

All of the various turnouts, crossovers and other track interconnections are called junctions.
​
Other Configurations

A level junction (or flat crossing) involves two or more tracks that cross but do not allow change of track. Such crossings might be used to permit the tracks of two different railroads to cross. Tracks of different gauges may also cross using level junctions.

Example of a level junction
​The following illustration shows the double main lines of CSX Transportation (CSX) and Norfolk Southern Railway (NS) intersecting at a level junction in Marion, OH.

Railroad track frequently must cross roadways (streets, highways) and occasionally an airport runway. Such crossings (also called grade crossings) require special construction so as to give bicycles, cars, trucks, etc. a relatively smooth path over the rails, while insuring that there is no interference with the wheels of a passing train (trains always have the right-of-way; why?). In general, such crossings are well marked so as to avoid accidents (although accidents do occur). In the United States there are some 200,000 level crossings, one of which is shown below.
​ 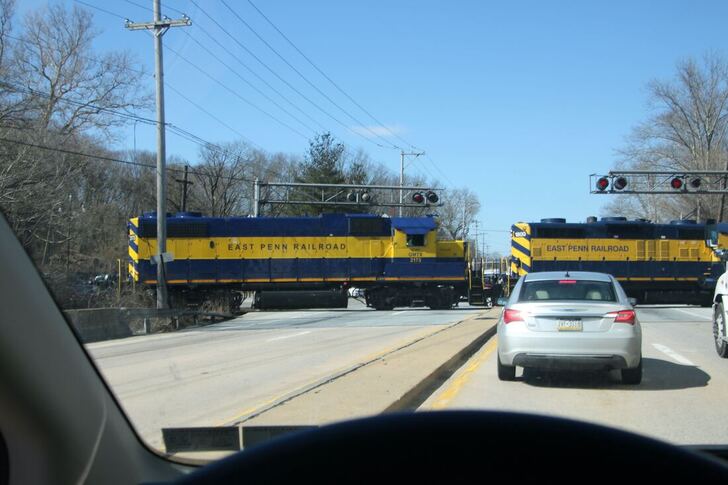 Waiting for an East Penn Railroad train to pass across U.S. Route 1 along the west side of Brandywine Creek in Chadds Ford, PA
​A recent accident at a level crossing on the Southwest Chief line near Mendon, Missouri shows what a poorly-designed level crossing can cause. The dump truck that caused the collision is not seen in the following photo. 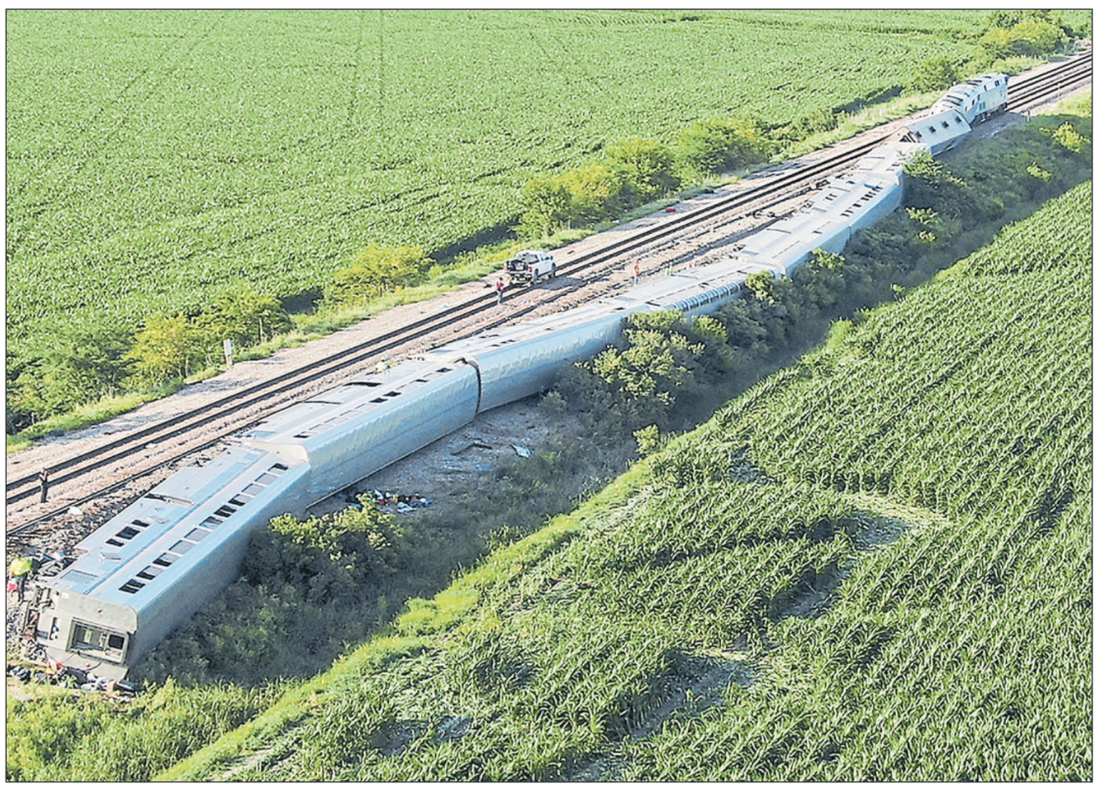 Amtrak train, in route from Los Angeles to Chicago, derailed after hitting a dump truck at a level crossing near Mendon, Missouri (Philadelphia Inquirer 2022 Jun 29, A10)
Railroad track is a fairly rigid construct. Trains cannot arbitrarily move from one line to another or cross other tracks. Track configurations enable railroads to undertake such movements in a carefully-planned manner.
​