There are two broad classes of unpowered railroad cars: passenger and freight (carriages or wagons). Obviously the things transported are people or goods.

Passenger cars of several types have been employed as determined by the purpose of the particular train under consideration. Passenger car types include coach, sleeping, dining, entertainment, observation, lounge and hybrid cars.

The most common type of passenger car is the coach or chair car. Such cars often have two rows of seats with a center aisle. The seats may be individual (often reclining), but are sometimes bench seats, depending on the quality of service on offer. These are called open coach cars (see below). 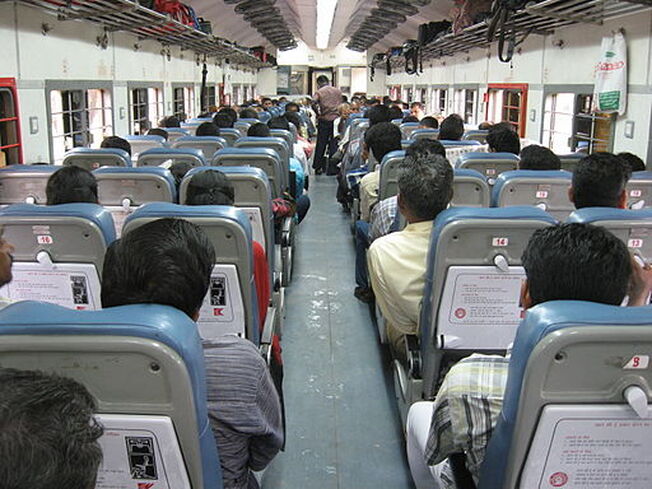 An open-type [3+3] coach or chair car of Indian Railways, India
Coach cars may also be double-decked, particularly on commuter trains where it is more important to move large numbers of people quickly than to be concerned with comfort. In such cases, the distance traveled is usually short.

​On the other hand, double-decked cars may be designed so that the upper deck is for observation (see Observation Cars, below). These are sometimes called "dome cars" and are used on routes that enable passengers to enjoy the scenery as they pass. In some examples of this type of car, a portion of the upper deck (sometimes lower deck) is open to nature, thus facilitating unobstructed photography and viewing.

Coach cars may also be of the closed type. These are also called compartment cars. Two seats face each other within a glassed enclosure. Each seat usually accommodates two or three passengers, with luggage storage overhead. An aisle (also called vestibule) is usually along one side of the car, with entrance to the aisle at either end of the car. However, some cars of this type have multiple entrances to the aisle from outside (from a platform).

Compartments may differ according to the class of service on offer, with some compartments designated coach class and some business or first class. Of course compartments also may be designated for smoking or non-smoking passengers. Coach cars also have toilet facilities, usually at one end of the car.

Sleeping cars are designed for the comfort of passengers on long-distance routes. Several kinds of sleeping car have been used. One kind has double-deck or "bunk" beds with shared bathroom facilities at one end of the car. The upper bed can be folded up during the day with the lower one converted to a bench-style coach seat. Limited privacy is provided by curtains.

Another kind of sleeping car is divided into compartments, sometimes with toilet and lavatory. Compartments are typically for two people sleeping bunk style and offering greater privacy. Shared shower(s) may be located at the end of the car.

The image below shows an "open section" sleeping car (Budd Company called them Slumbercoaches) in which each section can be converted into "bunk" beds with privacy provided by a curtain.
​ 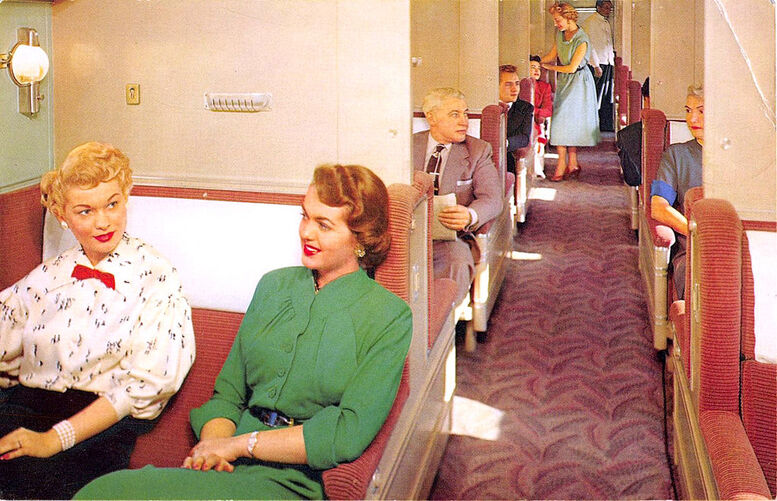 An open section sleeping car in day-time orientation. Each section converts into a pair of bunk beds with privacy curtain (Pullman car circa 1950)
Dining Cars

Dining cars may be designed in various ways, depending on passenger manifest, timing, class of service, kitchen design and other factors. Dining may be first-come, first-served or on a scheduled basis (e.g., 5, 7 and 9 p.m.) either assigned by sleeping car or by reservation. Dining cars may offer snacks, a fixed menu (table d'hôte), à la carte or multi-course service or some combination of these. Dining service also varies with the time available to offer the service. The following photo shows one style of dining car.
​ 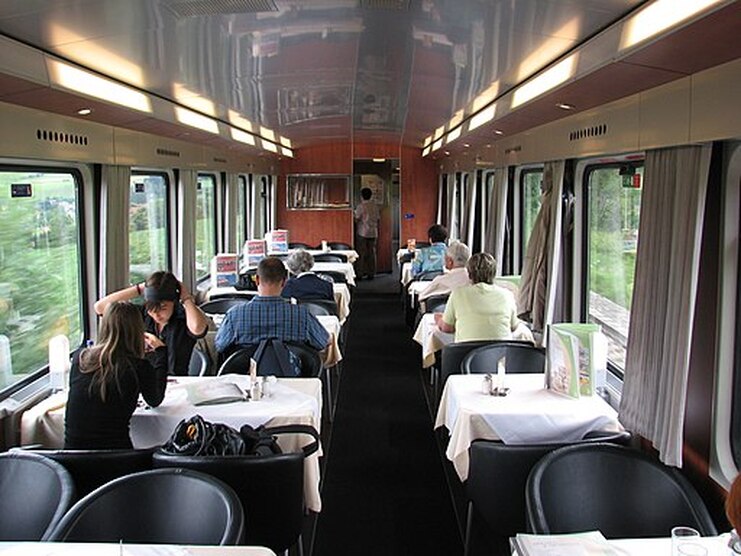 Entertainment cars are rare, although in former times complete productions were sometimes offered. Card games and other similar activities are sometimes available in a lounge car or in coach cars equipped with tables.
​
Observation Cars

Observation cars, when included in the consist, are of two or three types. One type is often the last car on a train and offers viewing through the windows of the car. A common type today is a two-deck car with the upper deck enclosed at sides and top in widows, allowing good viewing of the surrounding countryside. The lower deck may offer coach seating, dining or lounge services. Some observation cars have a portion of the upper (preferred) or lower deck open to nature. This permits passengers with cameras to capture photos unencumbered by windows or ceilings.
​ 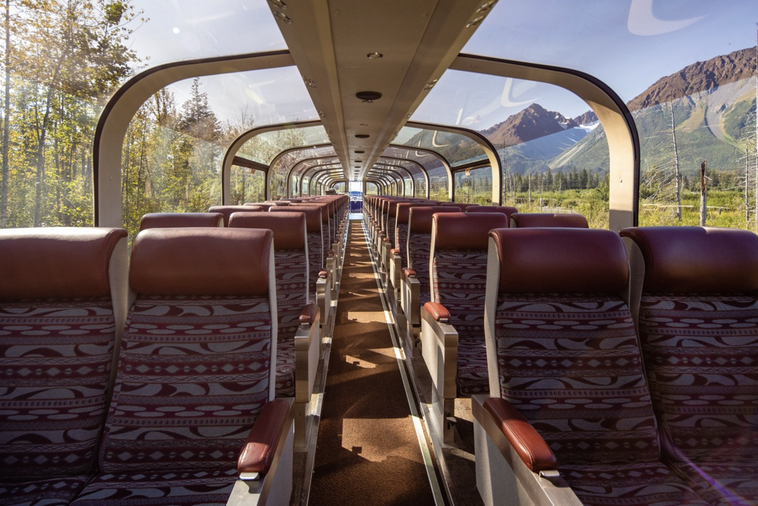 Upper deck of an Alaska Railroad observation/dining car; the rear of the car is an open-air portion for unencumbered viewing and photography
Lounge or Bar Cars

Lounge or bar cars are designed to provide both comfortable seating and the services of a bar. Snacks may also be offered. In some cases, a dining car may serve as a lounge car at other than meal times. More luxurious trains will probably have dedicated lounge cars. Individual railroad companies may configure cars for more than one purpose as passenger traffic and preference dictate. These may be called hybrid cars.
​
Passenger Train Consist

The consist of a passenger train, that is the complement of cars, powered and unpowered, that make up a train, will be determined by the railroad company based upon the route, the number of passengers continuing to the ultimate destination, purpose of the train (e.g., business or pleasure) and other factors, balanced against cost vs. return for each train. In some cases, the consist may depend upon the ability of the railroad to charge a premier-class fee. See the next section.