Railroads are transport organizations. Their purpose, therefore, is the movement of entities (freight or goods and people) between two points in space-time. As such they are classified as carriers, a topic we discussed in What is a Railroad?. See also UNECE and Britannica.
​
Purposes

Transport or transportation is the means of moving things from one place to another place in some specified time. There are many sorts of transport, such as movement of water from a water tower to one's home, transport of voice messages from one person to another via a telephone system, movement of people and goods by truck, boat or rail, and so on, as illustrated below. 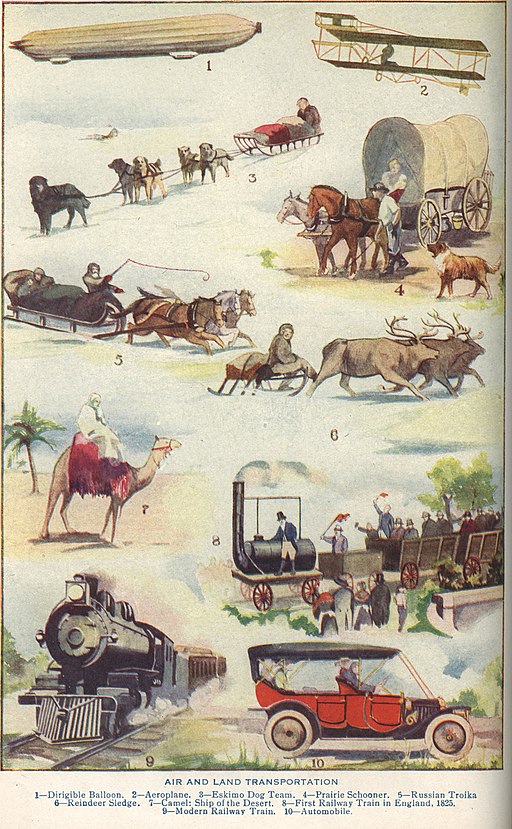 An artist rendering of various forms of transport, most still in use today
Here we are interested in transport by rail. See also UNECE RT.

Transport of goods by railroad involves the movement of large quantities from one place to another. This does not mean that a large quantity need be of just one kind of good in freight transport. Of course railroads transport car-loads of things such as gravel or milk, but bundles of individual items of all sorts, such as automobile parts or tires of various sizes and applications may also be transported, provided the bundle of goods is destined for a particular place.

​Transport of people by railroad involves the movement of many people from one place to another such as from Philadelphia, PA to Baltimore, MD (although some may detrain at Wilmington, DE (while others may board there) or from Paris, France to Amsterdam, The Netherlands.

​Transport also involves the matter of time. Railroad customers would rapidly move to alternative transport if a railroad could not deliver goods in a timely manner. In fact, it was railroads in England that helped establish standardized time by publishing railroad time tables that were based on Greenwich Mean Time (called railroad time) beginning 1847 December 1.

​All the above-mentioned factors, together with manufacturing and production, constitute the field of logistics. According to the Council of Supply Chain Management Professionals (CSCMP), logistics is the process of planning, implementing and controlling procedures for the efficient and effective transportation and storage of goods including services and related information from the point of origin to the point of consumption, for the purpose of conforming to customer requirements and includes inbound, outbound, internal and external movements.

In the United States, the Surface Transportation Board (STB) has broad economic regulatory oversight of railroads, including rates, service, the construction, acquisition, and abandonment of rail lines, carrier mergers, and interchange of traffic among carriers (see Carrier in What is a Railroad?). These various matters are beyond the scope of our discussion but may be mentioned as needed.

Shannondell Model Railroad is a transport system, but only on a limited model basis. It moves freight and people over its layout but does not actually carry on commerce with any of the entities modeled on the layout, except for a bit of advertising.
​
The following will be reorganized

Railroad Freight traffic management and control (FTM&C) is part of the discipline of logistics. FTM&C involves planning to transport goods over a fixed set of routes (trackage). This planning requires coordination with a number of entities, such as the manufacturer or producer, the wholesaler, the deliverer, forwarder and receiver. Coordination involves route (and alternate routes), timing (scheduling) and velocity control, necessary equipment (railroad cars, lift equipment, etc.), break-up and assembly of trains (yard work), crew assignments, weather, trackage conditions, un-planned incidents, and other factors.

Many approaches to FTM&C have been proposed and implemented. We discuss only the most modern of these approaches: Centralized Traffic Control (CTC), and Advanced Train Control System (ATCS).

Other personnel in a CTC might be employed to handle specific sorts of events or circumstances (e.g., public safety, maintenance of way management and control).

The operation of CTC is mainly computer-based, employing databases, video displays, graphical user interfaces, telecommunication systems and networks, voice communication via network (mainly voice over Internet (VoIP)), and an array of track-side and on-board sensing, monitoring, controlling and reporting equipment to make possible near-fool-proof operation. We will examine some of these types of equipment later.
​
Advanced Train Control System​

The Advanced Train Control System (ATCS) is a system is specified by the Association of American Railroads. The system is defined in "Manual of Standards and Recommended Practices. Section K: Railway Electronics." Archived March 27, 2009, at the Wayback Machine. AAR publications are usually available to members for a fee, so access to the above publication is controlled.

ATCS is railroad independent whereas CTC is not. This means that the implementation of ATCS by one railroad will be compatible with that implemented by any other railroad.

The ATCS architecture is comprised of five major systems. Four of these systems are: Information Processing System  (or Central Dispatch Computer) resident in the central dispatch office; On-board Locomotive System (or On-Board Computer); On-board Work Vehicles System (or Track Forces Terminal); In-The-Field System (or Wayside Interface Unit). These four systems collect, process, and distribute data with minimal input from dispatchers, enginemen, and foremen. The fifth system is the modern Data Communications System, which ties the various information processing systems together and significantly reduces the need for voice communications. This is the ATCS keystone system.

ATCS is designed for modular and step-wise implementation so as to permit each railroad to avoid the "all at once" approach to automation. Each railroad can choose to implement ATCS according its needs and resource availability.
​
The primary ATCS functions are:

In order to give an idea of the operation of a system with some of the capabilities of the ATCS, we present a realistic but fictional description of a railroad with advanced computing and telecommunication capabilities in the following paragraphs. In development...

​Just list some near by: Altoona, Wabtec, Progress Rail, etc. Lists
Back to Top