The main purpose of this Education section of our website is to help the reader grasp the fundamental concepts that every railroader should understand. This section also is intended to provide easy access to glossaries, acronyms, initialisms and abbreviations that are commonly used in the railroader's lingo.

Language of Railroads and Railroading

Every discipline employs a language all its own and the railroad industry is no exception. Throughout this website we have endeavored to define terms we have employed. But the language of railroads and railroading is extensive and certainly beyond the scope of our efforts. Here we present links to sources where terminology can be found defined and illustrated. We hope you find the links useful (see also External Links).

​Glossary of Railroad Terminology or Slang​

​Glossary of Railroad Terms
​
For access to more detail concerning the central aspects of railroading, use the buttons below, or the menu at left. Many terms will be defined in these locations.
​
Add information on yards,terminals
Roadbed and Track Maintenance

Add something about Maintenance-of-Way (MOW) ...

Rolling stock or railroad cars (as opposed to railcars) come in two basic kinds, powered and un-powered. The powered kind are usually called locomotives (engines, power units) and are designed and built to move a group of un-powered cars called wagons, thereby forming a train. Why wagon? Because in the early days of railroading, un-powered cars were actually existing wagons of various kinds, fitted with flanged wheels gauged to run on rails.

Locomotives are generally differentiated according to their energy source or prime mover. Energy sources are steam, fossil fuel (coal, oil, nuclear) or electricity.

Steam-powered locomotives convert the steam energy to mechanical energy by boiling water to produce steam. Liquid water increases in volume by about 1700 times at standard temperature and pressure (STP) when it changes to the gaseous state and it is this change in volume that creates a mechanical advantage.

Steam (gaseous water) produced in a boiler is piped to a cylinder containing a piston. This forces the piston to move. By linking the piston to an axel, the movement of the piston is translated into a movement of the axel. If the axel is fitted with wheels at opposite ends, the wheels will rotate, thus achieving motion along a predetermined path. If the cylinder containing the piston can be fed steam at either end, a continuous forward movement of the linked wheels can be achieved. That is the essence of operation of a steam-powered locomotive. Examples of steam-powered locomotives on the Shannondell Model Railroad may be found here.
​
Diesel-powered locomotives convert the energy of diesel fuel into mechanical energy by burning the oil in a diesel engine. A locomotive may link the diesel engine directly to an axel by means of gears that produce a continuous forward motion. Alternatively, the diesel engine may be used to run an electrical generator whose electrical output then drives a traction motor linked to the axel as in diesel-electric locomotives. Examples of diesel-electric-powered locomotives on the Shannondell Model Railroad may be found here.

Electrically-powered locomotives convert electric energy to mechanical energy by driving a traction motor connected to an axel in some way. The source of electric energy may be overhead lines (catenary), a third rail or battery storage (electric energy). Because of the cost of the basic infrastructure for electric supply, most electric locomotives operate in densely populated areas and over comparatively short distances or in situations where other power sources are unsuitable. Electric locomotives are nevertheless of high efficiency (up to 90%) compared with other types of locomotive and cost less to manufacture and maintain. Examples of electric-powered locomotives on the Shannondell Model Railroad may be found here.
​
Other Classifications of Locomotives

We just discussed one method of locomotive classification: power source. Two other methods of classification are perhaps more important.

Different systems for denoting wheel or axel arrangements have been developed in various countries. We describe the two most common systems.

The Whyte System of Classification of Locomotives

In the United States (US) and United Kingdom (UK) it is common to refer to a steam locomotive wheel arrangement numerically, first by the leading carrying wheels, then the coupled wheels (including the driving wheels) and finally the trailing carrying wheels, in a system invented by Frederick Methvan Whyte in the US in 1900. Examples are given in the following table.

Table Illustrating the Whyte Wheel Classification system
A list of US wheel arrangements is available here on the Wes Barris US Steam locomotive site.

Some European railways used the Whyte system except that the number of axles was used rather than the number of wheels, 4-6-2 becoming 231. This was further developed by the French who used numbers for non-driven axles and letters for driven axles, thus 2C1. Today, axel arrangement is specified using the UIC System.
​
The UIC System of Classification of Locomotives

The UIC system of classification of railroad locomotives is managed by the International Union of Railways (UIC: Union internationale des chemins de fer). There are two UIC systems to consider.

This classification scheme describes the axel arrangement of locomotives, multiple units and trams. Note that an axel in this context always implies two wheels. The UIC axel classification system is widely used world-wide, with notable exceptions being the United Kingdom, which uses a slightly simplified form of UIC (except for steam locomotives and small diesel shunters, where Whyte notation is used), and in North America, where the Association of American Railroads (AAR) wheel arrangement system (essentially another simplification of the UIC system) is used to describe diesel and electric locomotives; Whyte notation is used in North America only for steam locomotives.

The UIC axel classification scheme uses the structure defined in the following table.
​ 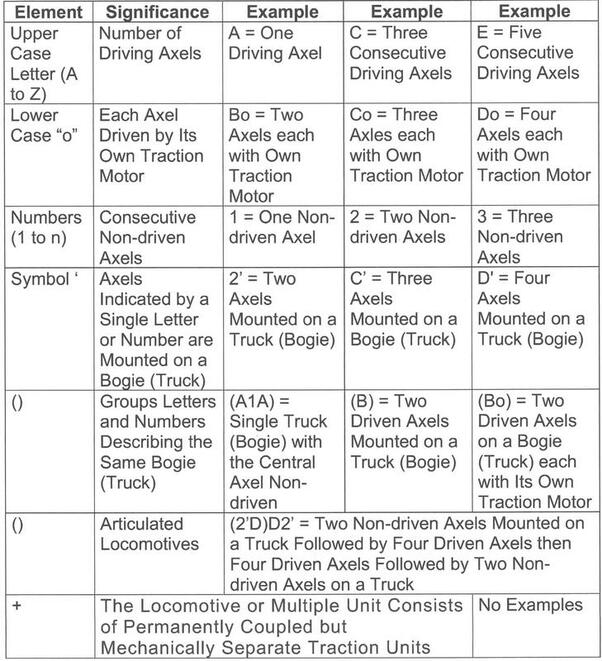 Specification and Examples of the UIC Axel Classification Scheme
​The following suffixes may be used with the above scheme to further refine a classification:
The UIC System of Identifying Locomotives

In addition to axel arrangement, the UIC system is used to identify a locomotive irrespective of axel arrangement. This system provides a unique identifier for every locomotive within its sphere of influence. The system is called the UIC Identification Marking for Tractive Stock (UIC ID Mark).

The UIC locomotive identifier is a 12-digit number that may be displayed as plain text, as a barcode or as a Quick Response (QR) Code.

The UIC locomotive identifier is structured as shown in the flowing illustration:
​

Structure of the UIC Locomotive Identifier
The International Block consists of two parts, a type code and a country code. The type codes, ranging from 90 to 99, specify a type of locomotive (e.g., 91 = electric locomotive; 92 = diesel locomotive). The country code is a two-digit number that specifies the country to which the identifier pertains. Spain, for example, has the country code 71.

The final digit is a check digit used to insure uniqueness of the complete identification mark. It is computed via an algorithm developed by H. P. Luhn.

An example UIC locomotive identification mark is shown and parsed below. The precise format of the number is immaterial so long as the order of digits is not altered.

A reporting mark or Vehicle Keeper Marking (VKM) is also assigned to every piece of rolling stock to identify the owner or leesee, as appropriate. In North America, the VKM or Reporting Mark is assigned by Railinc Corporation. Examples of such identifying marks may be found in the tables of Class I and Class II railroads presented earlier. 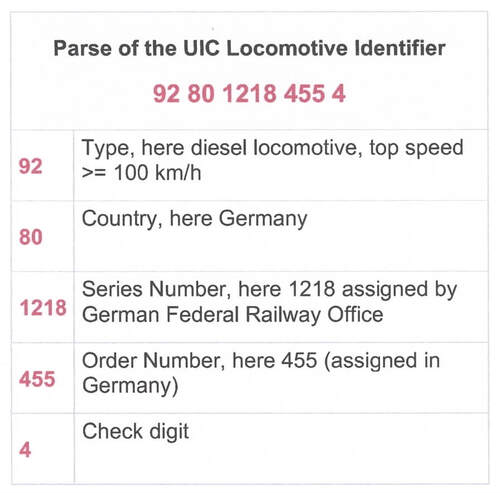 Parse of a UIC Locomotive Identifier
In the United States, rolling stock is identified by the Reporting Mark, followed by a number of 1-6 digits. For example, UP 23452 identifies an un-powered car owned by Union Pacific Railroad (UP). The number does not necessarily represent the total number of cars owned or leased by a Reporting Mark.
​
Unpowered Railroad Cars. (UNDER CONSTRUCTION)


What are Fast Trains?

Lifelong Learning (what to do with this?)

In 2018, the The Foundation at Shannondell [https://www.shannondell.com/about/ philanthropy/] provided an award to the Shannondell Model Railroad Club (SMRC) for their contribution to the Foundation's objective of Lifelong Learning.

To continue our support of Lifelong Learning in 2022, the SMRC is inviting historians to come and speak on local railroad-related history. For details, see Education.

We also prepared a collection of placards that explain various aspects of railroad operations and history. These placards are displayed around the Shannondell Model Railroad layout. Click here to see these placards “in action”.
​