Railroad tracks do not run along only open ground. In order to keep grade close to 0°, it is necessary to make cuttings, fill culverts, dig tunnels or build bridges. For our purposes, we shall assume that careful surveying, testing, analysis, engineering and design are employed before any actual construction work is begun. A treatment of these matters is beyond the scope of this brief discussion.

A cutting involves removal of part or all of a hill so as to avoid traveling up or down hill. Sometimes cuttings only involve removing soil and rock, and leveling, but it is often necessary to construct a retaining wall to prevent material further up hill from falling or collapsing onto the track to be laid.

​A famous cutting and fill section of the main line between Harrisburg and Pittsburgh, Pennsylvania is Horseshoe Curve, built by the Pennsylvania Railroad in 1854 to facilitate moving freight over the Allegheny Mountains. Horseshoe Curve is now a three-track railroad curve (formerly four tracks) lying midway between Altoona and Gallitzin, PA. Between these two towns, the line climbs 1.85°. The trackage is now part of Norfolk Southern Railway. A visitor center, operated by Railroaders Memorial Museum, welcomes visitors year round. The curve is on the National Register of Historic Places (1966) and was designated a National Historic Civil Engineering Landmark in 2004. Below is an aerial photo of the curve in 2006.
​ 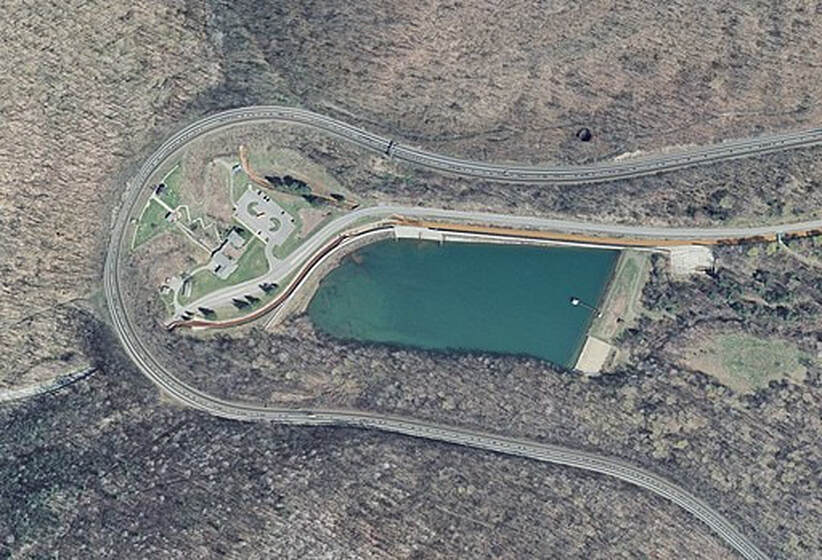 Horseshoe Curve on the main line between Harrisburg and Pittsburgh, Pennsylvania surrounding a visitor center and reservoir
Tunnel

If a cutting is insufficient to achieve a level way and rerouting is infeasible, a tunnel will have to be dug. Historically, tunnels were dug by hand with the aid of explosives and perhaps by the use of the already finished part of the track(s). Today, tunnels are created using tunnel-boring machines (TBM). The longest railroad tunnel in the world is the Gotthard Base Tunnel at some 35 miles (57.09 km) in length (running slightly northwest from Bodio to Erstfeld, Switzerland. The grade northbound is 4.055% (max) and southbound is 6.76% (max). For that tunnel, boring began at four places (there are actually two tunnels, East and West). A video (6.3 minutes) helps to understand the operation of a tunnel boring machine.

Another famous railroad tunnel is on the Canadian Pacific line in the area between Lake Louise and Field, British Columbia. The route includes two spiral tunnels dug in three-quarter circles into the walls of the Kicking Horse River valley. The higher tunnel is about 1,000 yards (0.91 km) long, dug into Cathedral Mountain. When the line emerges from this tunnel it has doubled back, running beneath itself some 50 feet (15 m) lower. It then descends the valley in almost the opposite direction to its previous heading, before crossing the Kicking Horse River and being dug into Mount Ogden north of the river. This lower tunnel is a few yards shorter than the higher one and the descent is again about 50 feet (15 m). From the exit of this tunnel the line continues down the valley on the original heading, toward Field, BC. This scheme effectively doubles the distance traveled on this section of the line, but reduces the gradient from the earlier 4.5% to 2.2%. The route just described is illustrated below. 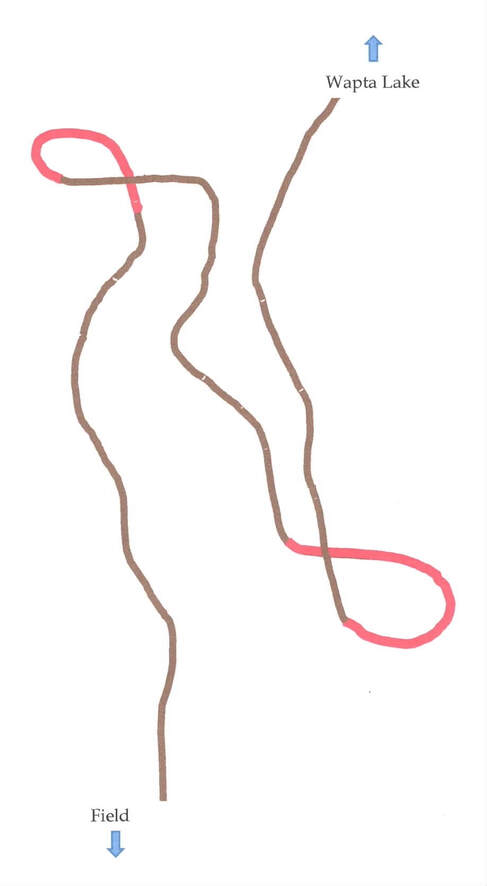 Material removed from cuttings, or else brought in from other sources, may then be used to fill culverts or low places somewhere else along the intended path of the track. This work may also require installation of drainage to prevent flooding when a culvert is filled, since a culvert is usually created by running water, whether continuous or periodic.

If a culvert or valley is too great to fill, a bridge must be built. Sometimes an existing bridge can be modified to carry rail traffic as well as automobile or other traffic. In many cases, however, a new bridge must be built, either because of the load to be carried, the desired location or both. Bridges are fairly common along railroads and several can be seen in your local area. One of the most famous railroad bridges is Glenfinnan Viaduct over the River Finnan in Scotland. The bridge, built 1897-1901, has appeared in numerous films, including four of the Harry Potter series. Here is a photo of the bridge with the The Jacobite crossing. 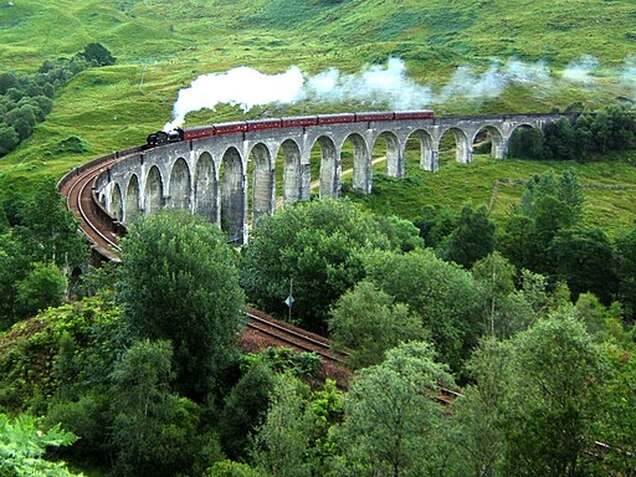 The Jacobite crossing the Glenfinnan Viaduct
Other well known railroad bridges include the Hell Gate Railroad Viaduct linking New York City with New England; Tyne Bridge in Newcastle, England and the Sydney Harbour Bridge in New South Wales, Australia (both based on Hell Gate). There was also the Florida East Coast Railway extension (Overseas Railroad) consisting of several bridges connecting the Florida Keys all the way to Key West. This very significant achievement was terminated by the hurricane of September 2-3, 1935.
​