In this section, we discuss and illustrate the various types of freight (goods) railroad cars in use today. We also describe the basic construction of these unpowered vehicles, since certain aspects are common to all rolling stock. For a detailed historical view of freight cars, see White, Jr., John H. The American Railroad Freight Car. Baltimore, MD: The Johns Hopkins University Press: 644 pp. Another useful reference is provided by CSX that gives both car types and dimensions.

There are essentially six (6) types of freight car, each with several variants. These types and some variants are listed in the following table. For another useful source, click here.
​ 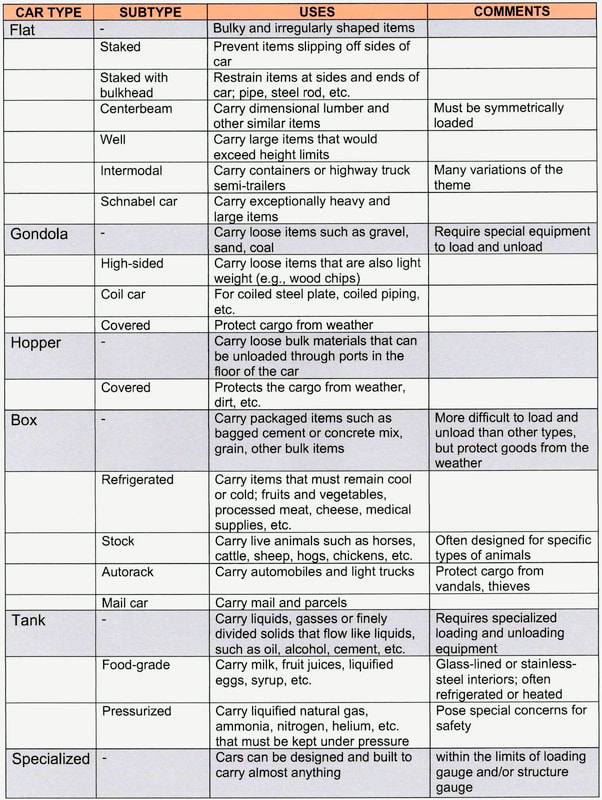 Principal types of railroad freight cars and variants
Flatcars
​
The flatcar (flat, flat car) is one of the most adaptable and versatile railroad cars and there are several variants designed for specific purposes. Several of these are included in the table just above. Here is a photo of a plain flatcar. As can be seen, it consists of a steel frame riding on two 2-axel trucks. It has a wooden deck and you can see slots for stakes at the sides and ends. This example is from the Wiscasset, Waterville and Farmington (Maine) Railway which used a 2' (610 mm) rail guage. This railway ceased operation in 1936. Note that this example used truss rods under the center of the car for support rather than the steal beams of today.

Wiscasset, Waterville and Farmington Railway flatcar circa 1930 (narrow guage)
Staked flatcars used stakes (wood or metal) to prevent materials from falling off the sides. Bulkhead flatcars have end "walls" to prevent loads from sliding forward or backward on the bed. Intermodal flatcars are designed to carry highway semi-trailers or containers in order to compete but also cooperate with truck traffic on highways. Intermodal freight requires special loading and unloading facilities at ports, rail yards or shipper facilities.

Centerbeam flatcars are designed to carry large bundled cargo such as lumber, drywall, plywood, and fence posts. A steel beam is constructed along the center axis of the car that permits secure binding of materials to the center beam. Such cars require loads to be balanced either side of the beam.

Well flatcars are cars with the portion between the trucks depressed to accommodate loads with heights greater that would be allowed on a plain flatcar. Minimum clearance above the rails is 2.5 inches (63.5 mm). Double container cars are more similar to gondola cars without a solid bottom. Trucks (bogies) are shared between two such cars. A well flatcar is shown below.
​

A depressed center or well car carrying a heavy and tall load. Note the car rides on two 2-axel trucks which are in turn supported in part by two other 2-axel trucks connected with bolsters to facilitate movement over curves
​Gondola Cars

An HO-guage replica of a Norfolk and Western (NW) typical gondola car on the Shannondell Model Railroad
Because gondola cars carrying loose goods such as gravel or sand are somewhat difficult to unload, special equipment, called rotary car dumpers, have been devised to unload these cars. A gondola car is rolled onto a special section of track, and together with the track, is inverted to dump its load. Such equipment is illustrated below. A video (2.5 minutes) shows the operation of such equipment.
​ 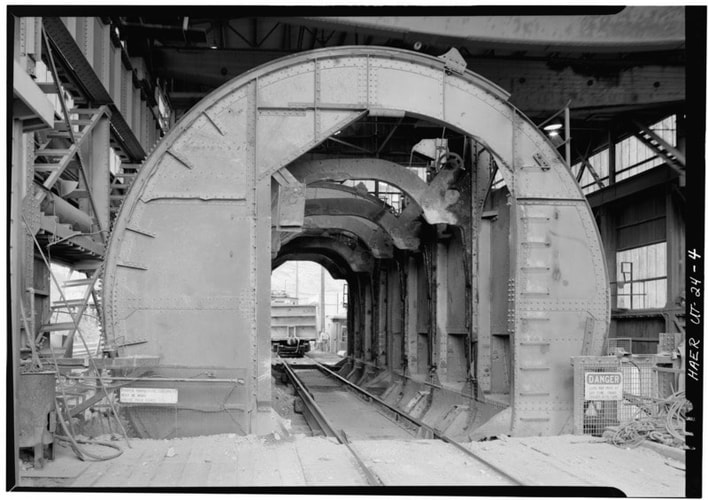 ​Another common railroad car is the boxcar (also called covered goods wagon or van). Such cars are essentially closed boxes on a flatcar. Boxcars may be used to carry a very wide array of goods. In some cases, boxcars have special designs to accommodate the particular type of freight to be carried. Such designs accommodate livestock (cattle, horses, sheep, goats, hogs, poultry, even exotic animals -- stock cars), packaged goods, automobiles and many other items.

With the advent (ca. 1851) of the refrigerated boxcar (reefer), it became possible to transport vegetables and fruit, fresh meat, cheese, butter, beer, milk and so on (especially over long distances). Blocks of ice were initially used to refrigerate boxcars. The development of mechanical refrigeration units made possible temperature control and year-round shipment rather than being limited to winter months. Many types of goods, including human blood, fish, green onions, milk, strawberries, and certain pharmaceuticals can be transported via refrigerator car.

Boxcars, originally built of wood, are now made of steel or aluminum. Boxcars typically have doors on the long sides. Various door styles are used depending on the use of the car. Single or double doors, hinged or sliding doors, loose or sealing doors, and locking doors may be found on boxcars. In particular applications, such as automobile transport, where the boxcar is called an autorack, doors may be on the ends to facilitate loading and unloading. Autoracks may be double or triple deck.

Most boxcars can be loaded and unloaded using forklifts, which speeds the process and facilitates forwarding of goods. In the case of stock cars or autoracks, loading and unloading is usually unaided.

A typical boxcar is shown in the following photograph. 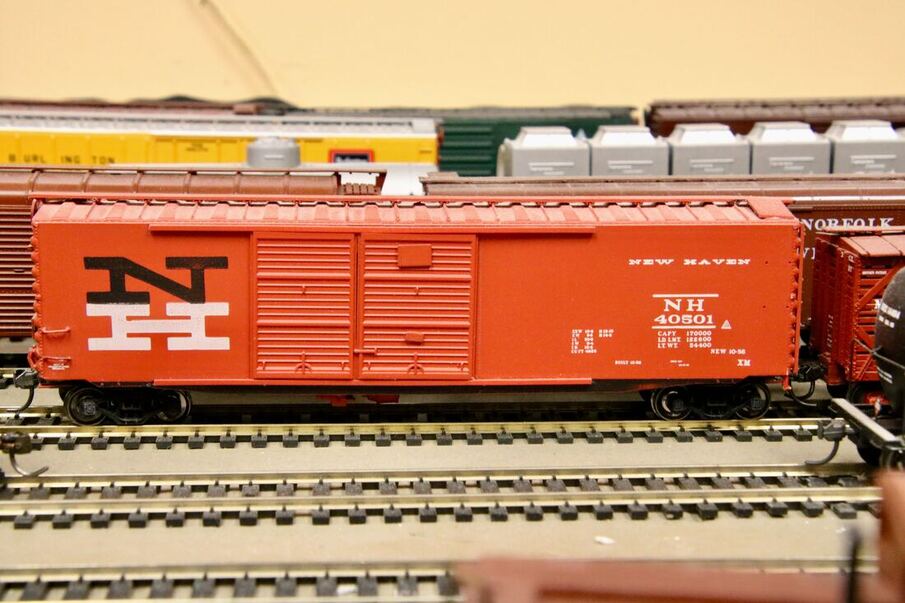 A hopper car is similar to a gondola car except that it is unloaded through hatches in its bottom. The lower part of the car's interior takes on a rectangular funnel shape that directs the contents toward the unloading hatch(es). The number of hatches ranges from two to six. In addition to the number of hatches, hopper cars are distinguished by being open to the elements or covered to protect the contents from the elements. Open hopper cars are used to carry crushed metal ores, crushed stone, coal and similar goods. Closed hopper cars may be used to carry grain, animal feed, cement, or other goods that require protection from the elements. An example of a covered hopper car is illustrated below. 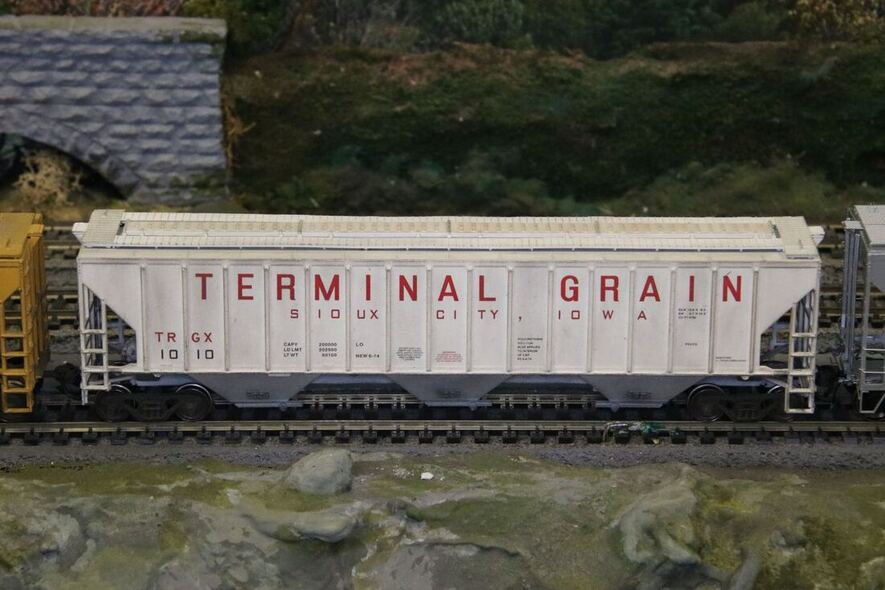 In contrast with the railroad cars so far discussed, tank cars are designed to carry difficult-to-contain goods, such as gasoline, alcohol, various gasses, milk, orange juice and cement. Although all of these goods can be carried in gondola cars and boxcars if they are suitably packaged, they can only be carried in bulk in tank cars.

Tank cars are designed for various purposes. For example, tank cars designed to carry diesel fuel need to be strong enough to support the weight and be built of material that does not contaminate the fuel. Tank cars designed to carry acids such as sulfuric or hydrochloric need to be glass-lined to prevent the acids from dissolving the tank. Similarly, tank cars used to carry food-grade products (e.g., milk, juice, liquified egg) need to be lined with stainless steel or glass to protect the quality and integrity of the product. Some goods must be kept cool or cold, some must be carried under pressure. Some tank cars require special features to protect the shipped goods in the event of an accident or criminal attack. There are tank cars to accommodate any such requirement. Specifications for tank cars may be found in CFR Title 49 Volume 3, Part 179 - Specifications for Tank Cars. See also Tank Car 101.

An example of a common tank car is shown in the following illustration. 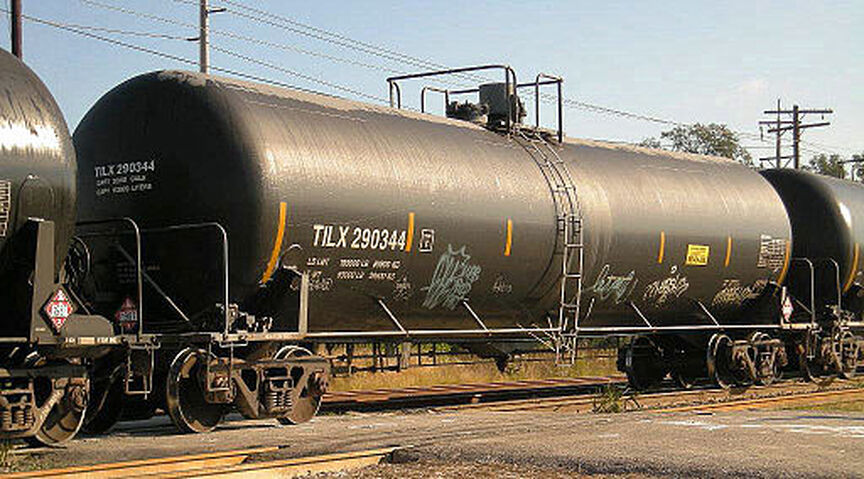 Special freight cars either exist or can be built to carry virtually any goods (within certain limits). Things such as airplanes, rockets, wind turbines, heavy machinery, large electric transformers and related items, boats, military equipment, rails and even railroad rolling stock can be carried on the railroads of today.
​
Design Limitations

There are certain limitations on the design and construction of railroad freight cars. One is the maximum allowed weight per axel on a train. This limitation can at least partially be overcome by using more axels per unit length of rolling stock. For example, a hopper car carrying 200,000 lbs. or 100 short tons of grain on two 2-axel trucks (bogies) will have an axel weight of 25 tons. This may be improved by using 3-axel trucks to yield an axel weight of 16.66 tons.

Another limitation is called the loading gauge. This is a measure that defines the maximum height and width dimensions in railway vehicles and their loads. The loading gauge is determined by the structures along a rail line, including tunnel dimensions (height, width and curvature), bridge clearance dimensions, overhead catenary height and clearance of supporting structures, etc. The loading gauge determines the limits on loading as a result of prior railroad company decisions about structures the railroad has built or acquired. Loading gauge may easily be measured by using a physical structure that embodies the minimum height and width conditions on a given route and then simply passing the train through the structure. If the train passes through without incident, it will not encounter problems along its route.

At the same time, railroads use a structure gauge, also called the minimum clearance outline, that sets limits on the extent to which bridges, tunnels and other non-railroad infrastructure can encroach on rail vehicles. It specifies the height and width of platforms, tunnels, bridges, and other structures that could impede movement along the rails.

​Yet another limitation is the radius of curvature of track along the rail line. Loaded freight cars must be able to negotiate all curves on a line from point of departure to destination. This is especially important for modern railroad cars that are typically much longer (up to 90 feet or 27.4 meters) than earlier versions.

Modern railroad freight cars are designed to carry weights from 50 to over 100 tons (100,000 to 200,000 pounds or 45,359 to 90,718 kilograms). Of course, there are ranges of cubic capacity (for dry goods) or gallon (liter) capacity for liquids or length measure (feet or meters) for long items. Keep in mind the Design Limitations discussed above. In general, railroads can transport almost anything, given these limitations and some lead time.
​