Track geometry also includes grade. On level track the two rails must be level with respect to each other both laterally and longitudinally. For grade other than 0°, the two rails should remain level unless on a curve where geometry is determined by grade, radius of curvature and cant.

Track geometry also covers gauge. The distance between the inside edge of the head of the rails must always be a constant plus some permissible tolerance. For standard gauge track, the distance is 1435 mm to 1445 mm.

Track geometry is affected by wear.​ Rail wear is to be expected given the mass that rails are to carry as well as to velocity, braking and other factors. Rail wear results when trains traverse curves and place uneven force on the two rails. Hard braking may result in wear of the running surface. Wear occurs at the junction of jointed rails and at turnouts and other rail configurations where a pounding effect can occur. Washboarding or corrugation, though not strictly wear, is caused by wheel vibrations that occur at particular velocities. The washboard effect is amplified with time. Grinding is used to correct washboarding and other surface wear but at the same time it slightly changes the rail geometry. Eventually, the rail(s) must be replaced.

Finally, track geometry must address the actual location of the track in space-time. Track may be moved from its original location by repeated use or by natural forces. In either case, the track must be realigned. This is usually done with track-laying machinery once the alignment problems been identified and quantified.

All of the measurements required for the various conditions referred to above can be done by a geometry car such as illustrated below.
​ 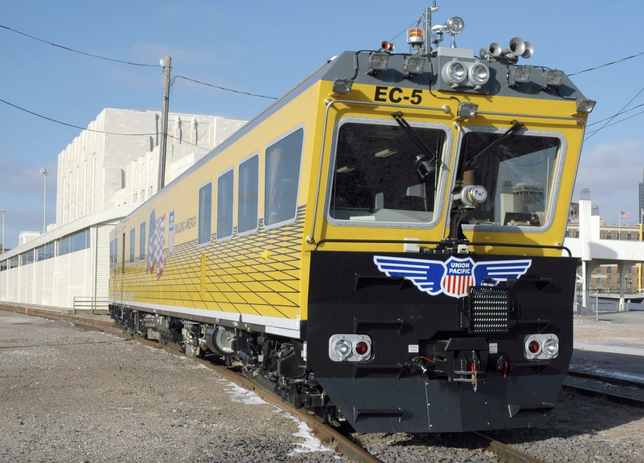 Track configurations such as turnouts, crossovers, level junctions, level crossings and such (see Track Configurations in Railroad Infrastructure) require frequent inspection and more frequent maintenance because of the more fragile and complicated components of these elements of trackage.

Railroads must establish and maintain standards for turnouts, crossovers and other special track configurations. These include joint spacing through the turnout, tie spacing, proper placing of guard rails, proper location of slide plates and braces, standard frog plates, proper curvature through the leads and so on. You can get a better idea of what is involved in maintaining special track configurations by reading a report of an American Railway Engineering and Maintenance-of-Way Association (AREMA) committee titled "Maintenance and Inspection of Turnouts" (pdf). See also AGRICO GROUP and Ekoslide s.r.o.