Maintenance of Way - Dealing with Nature

Most of railroad operations are conducted out of doors. This means that a railroad is exposed to everything nature has to offer, much of which is benign. However, as we all know, Nature has a way of keeping us on our toes.

Some natural phenomena are seasonal or are at least more or less predictable. These include changes in temperature as seasons come and go, precipitation (fog, rain, snow, ice) and wind (not so predictable in the form of tornados or hurricanes/typhoons). Such phenomena allow for preemptive measures as well as corrective measures to keep a railroad operating. But many cases only permit corrective measures, such as flooding, land slides, earthquakes, lightning (and related electromagnetic phenomena) and tsunamis.

Add to these natural phenomena the matter of global warming and associated effects, and railroads have plenty to be concerned about. We will not attempt to detail these concerns. A good discussion of weather-related matters affecting railroads is a paper by M. Rossetti, Potential Impacts of Climate Change on Railroads, Strategic Planner and Economist at the The John A. Volpe National Transportation Systems Center, Cambridge, MA operating under the United States Department of Transportation, (undated but later than 2002).

Construction of trackage must take into account the likely temperature range within which the rails are expected to function. Expansion can be accommodated by designing a layout in such a way as to allow the track to move. This can be done by strategic use of curves that can expand and contract within design limits. Sometimes, small sections of track may be added or removed to accommodate shrinkage or expansion.

Maintenance of trackage must also take into consideration the affect of temperature. As noted elsewhere, trackage is constantly moving. However, maintenance must insure that the movement is within permissible limits, otherwise the movement must be corrected.

Fog interferes with railroad operation in several ways. Train drivers may not be able to see control signals or obstructions on the track. Signals at level crossings may not be visible to automobile drivers. Rail yard operations may be curtailed. Safety of personnel will be diminished. In every case the result is likely to be bad.

Snow is just granular ice. As snow compacts it becomes denser and eventually forms large swathes of ice, sometimes called glaciers. In any case, ice and snow are inimical to railroading. Powdery snow can be readily removed from trackage by means of plows or blowers. A snow-plow train is shown in operation in this video (4:07 minutes). A rotary snow plow used by BNSF is shown below.
​ ​ 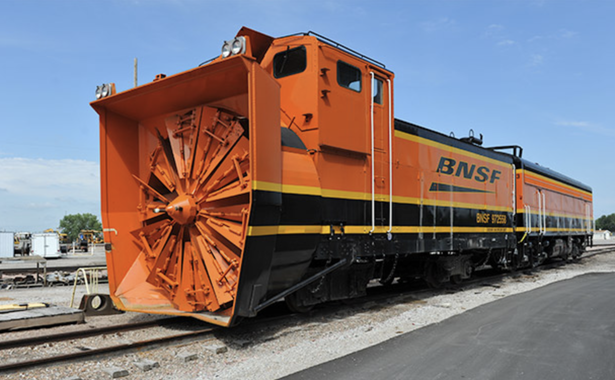 A BNSF rotary snow plow or blower ready for action
​
​However, moving snow from tracks creates a new problem: where to put the snow. This is especially troublesome where two or more lines run parallel. It is also a problem in yards, stations or in areas where track runs through cuttings. This video (0:43 minutes) clearly demonstrates the problem.

​Snow can be prevented from piling up on tracks by use of snow-drift fencing but in blizzard conditions (for example, across the Great Plains of North America) such fencing may not be of much help.

In the mountains, avalanches are a winter threat. In some areas, tracks are covered by snow sheds to fend off an avalanche and protect the track. An example snow shed is shown below. 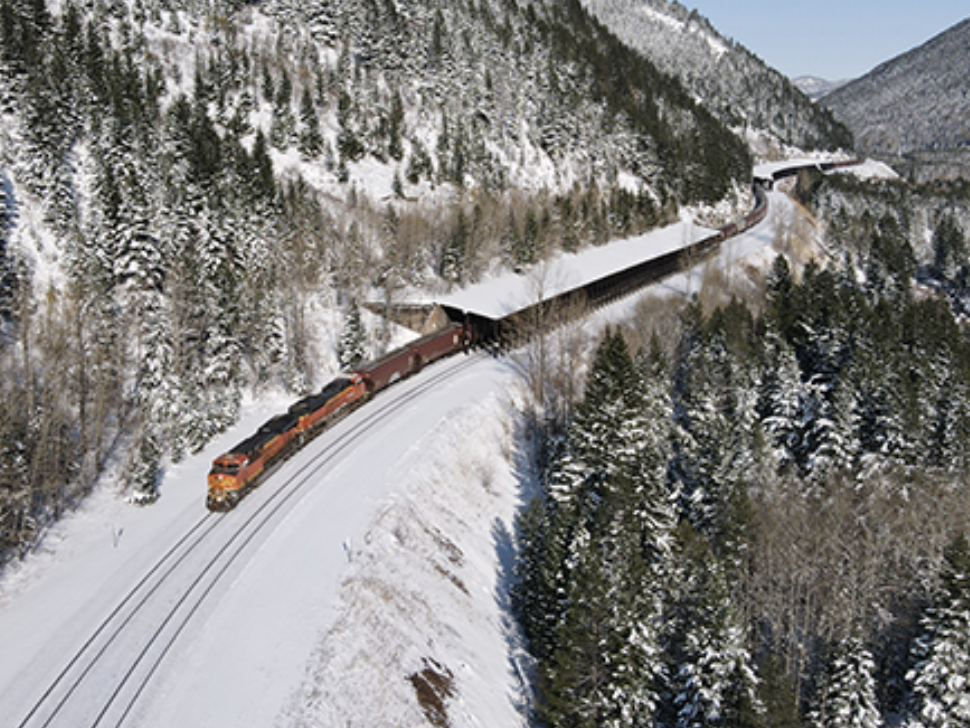 A snow shed along a BNSF line in the mountains of Montana
Ice is not as bulky as snow, but causes serious problems when it blocks switches, signals and other essential equipment. Frozen switches are all too common in colder climates. Various attempts to tackle this problem include heaters (see illustration below), 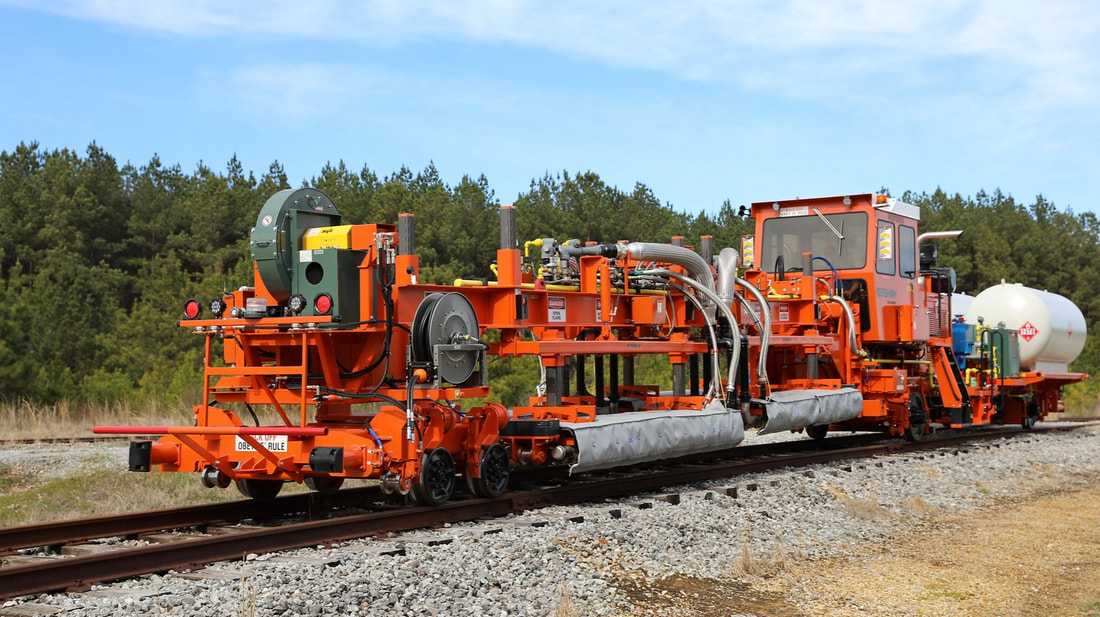 Ice on rails causes loss of traction and thus may either make moving or stopping difficult. Locomotives are usually equipped with a sander (sandbox) that permits the driver to deposit sand on the rails in front of the driving wheels to improve traction or aid in braking.
​Wind

Railroad cars are fairly high and long (high profile) and thus present considerable surface area to wind. This gives rise to a risk of being blown over. Trains or parts of trains have been derailed in this way. Click here for an example.

​In the case of hurricanes or typhoons, storm surge can result in serious damage to railroad infrastructure. The route of Amtrak's Sunset Limited (operating from Orlando, FL to Los Angeles, CA suffered serious damage between San Antonio, TX and Mobile, AL as a result of Hurricane Katrina in 2005 August. Today, the train operates between New Orleans, LA and Los Angeles. No Gulf Coast passenger service exists east of New Orleans.

​Wind also adversely affects railroad operations by blowing snow or sand onto tracks, effectively blocking the movement of trains (see Ice and Snow, above or Sand, below).
​
Electromagnetic Phenomena

Given the increased use of computer-based telecommunication and control systems in all aspects of railroad operations, railroads are seeking solutions to protect these assets because uncontrolled power surges can shut down operations. Railroad yards depend heavily on electrical and electronic components to operate safely and efficiently. Shutting down a yard due to lighting strikes, magnetic interference and other problems would bring significant parts of a railroad to a halt, causing heavy economic losses, supply chain disruptions and significant damage to critical infrastructure.
​
Sand and Other Particulate Matter

In some parts of the world, sand is as much a problem as snow elsewhere. Sand is moved by wind or water and can pile up on trackage quite quickly. Sand is a problem in desert regions, along coastal areas, and where rain storms wash sand (mud, gravel, etc.) onto tracks. When sand or other particulate matter such as dust is dry and loose, equipment similar to snow plows may be used for removal. A machine designed for sand removal is shown below. 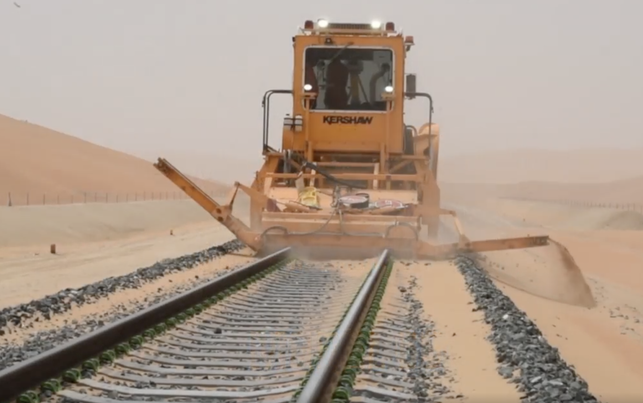 Kershaw Model 60 Sand Remover showing broom and conveyer at work (plow is at the other end)
More to come ...