Once ROW is established, trackage (rail lines) may be constructed. This involves several steps, including preliminary testing and evaluation of the land on which the track is to be laid (including environmental concerns), detailed design and preparation of engineering drawings and so on. Keep in mind the fact that trackage needs to embody as little inclination or declination as possible (no up and down hill). It also must be concerned with radius of curvature and other factors that affect the velocity at which trains may operate. After all, time is money.

The basic structure of the track bed is suggested in the following illustration. Because of the weight of trains passing over the railway, the foundation must be firmly established, adequate drainage provided and a sound layer of sub-ballast (fine crushed stone) and ballast laid down.

Cross-section through railway track and foundation
In addition, the grade must be carefully established. Grade (gradient, slope, pitch, incline, rise) is the inclination or declination from level. Grade can be expressed in various equivalent ways, as shown in the following diagram. Trains operate best on level track. Grade, for most of railroad history, was kept to near 0 degrees (0°) by means of cuttings, tunnels, bridges and fills (see Roadbed Components, later on).
​ 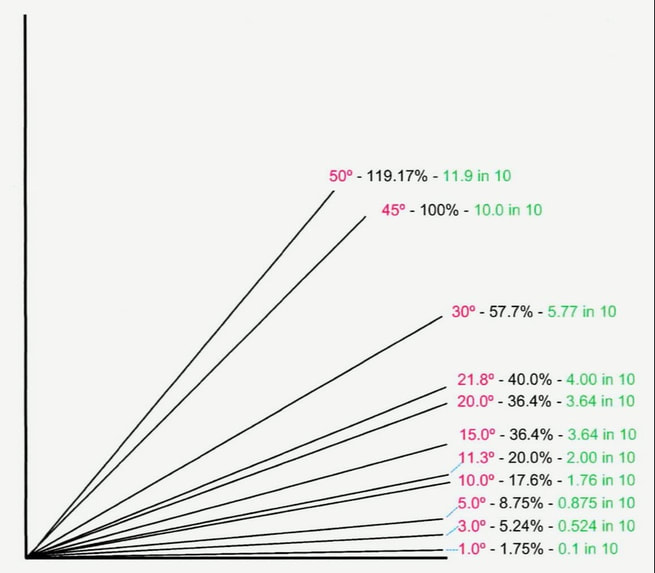 Grade shown in degrees, percent and rise
​Today, the use of diesel-electric and electric motive power means that grade is of lesser concern but can by no means be ignored. For many years, the "ruling grade" was considered to be 1% (the steepest incline navigable by existing motive power). Today the ruling grade is considered to be 2.2% although steeper grades are in regular use where motive power is sufficient. Grade is as important going down hill (declination) as going up (inclination), because of the need for braking (see Braking in Transport).

Grade is also important on curves where it is referred to as cant. In essence, the rails are banked (outside rail higher than inside rail) to reduce the lateral force on the rails around a curve due to centrifugal force and allow for faster travel around the curve. Cant is especially important on passenger lines for the comfort of passengers. Too much cant on freight lines can cause extra wear on the inside rail because of the greater weight of freight trains.

​Modern railway construction tends to favor the ballastless approach to track laying in which a concrete base (similar to a highway) is poured, upon which concrete or steel ties or sleepers are laid, often on a resilient pad, to support the rails and reduce vibration. This approach is most commonly used in railway terminals and on high-speed rail lines.

The next step in railroad construction is placement of the ties (sleepers) upon which the rails rest. For most of railroad history, ties were made of wood having approximate dimensions of 7 x 9 x 102 inches (17.8 x 22.9 x 259 cm). Such ties suffered from weather, heavy use and frequent need of replacement. While wooden ties are still in use, modern track, laid on gravel beds or a ballastless foundation, uses prestressed concrete ties (sleepers) or steel ties. Wooden ties are usually laid with spacing at 19 inches (48-49 cm) on centers; concrete or steel ties with spacing of 24 inches (58 cm) to 30 inches (72.6 cm) on centers. This spacing reduces the number of ties needed per mile of track. 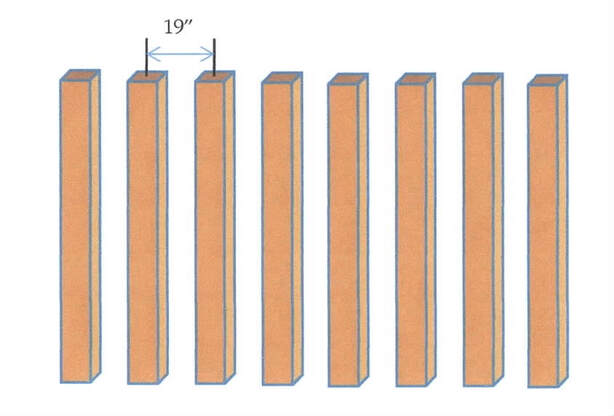 Rails are made of steel. Over the years, research has enabled the steel used to be improved (metallurgy) and the rolling of it into rails improved to reduce failure due to internal flaws in the steel structure.

In the United States, rails have a cross-section such as specified in the drawings below. The rails are called flat-bottom rails. The particular shape of rails, as well as the composition of the steel used, varies with the load and speed to be supported and other factors.

Rail Classification
​
Rails are classified according to their weight per unit distance and to their cross-section. In the drawings, the PRR rail has a weight of 100 lbs/yard (49.6 kg/meter) of rail, while the 115 RE rail has a weight of 115 lbs/yard (57 kg/meter). Rails are manufactured in a variety of classes for use in particular applications, such as main-line freight, sidings and high-speed rail. Today, rails are most often 115 or 132 pounds per yard (57.5 or 66 kg/m).
​
​Rail Fastening 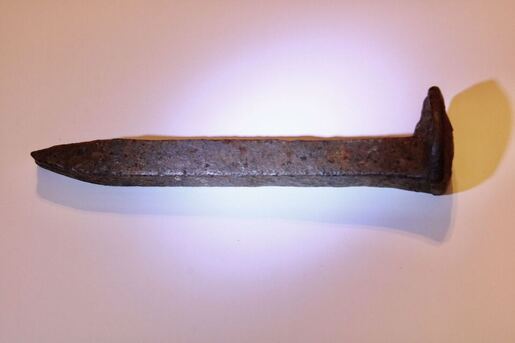 Typical spike used with wooden ties (sleepers)
​Screws have come be used since they hold better and can be applied mechanically.

​Today, prestressed concrete or steel ties are often used in which the equivalent of tie plates are embedded in the tie. A rail is held in place by some form of clamp. See Fasteners for more detail.
​

Tie plates (or other fasteners) are positioned on a tie so as to achieve the gauge the railroad operates on. Gauge (sometimes spelled gage) is a measure of distance between the rails forming a track. "Gauge" is also used for other measures, such as model railroad track (e.g., HO gauge), wire diameter, air pressure and so on. In railroading, gauge refers to the distance between rails of a track, measured from the inside of the head of the rail.

​In much of the world, standard gauge, which is 4 ft 8-1⁄2 inches (1,435 mm), is used but there are several other gauges in use as well. The following table shows several railroad gauges that have been or are in use presently.

Various railroad gauges that have been used
Use of spikes has engendered many references to them in song and folklore (we mention the golden spike, denoting the initial completion of Shannondell Model Railroad, in Club History). Today, when spikes are used, a special spiking machine does the job; in former times a spiker was expected to drive a spike with a spike maul in three blows. Given that each tie-plate required 5-6 spikes, the spiker had to drive a large number of spikes per mile of roadway. (No, John Henry was not a spiker but a miner.) The following photo shows the typical connections when wooden ties, tie plates, spikes and bolted rail are used.
​ 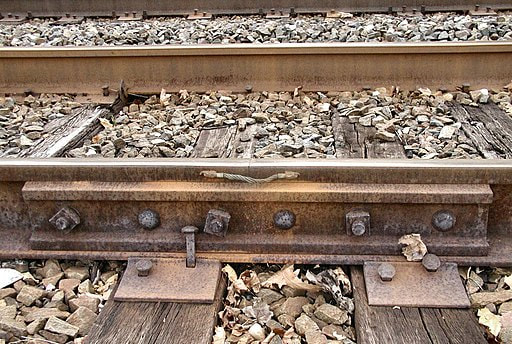 In the United States, track carries a classification that specifies the upper velocity limit permitted on the class of track. The classes and velocity limits are shown in the following table.
​ 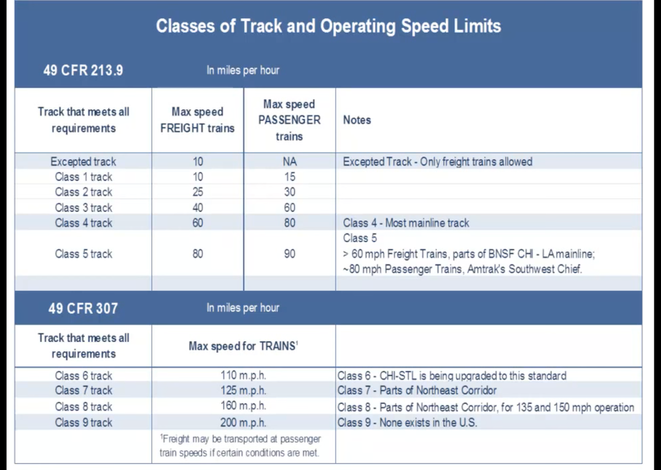 Classes of track and operating velocity limits as specified by Federal Railroad Administration in 49 CFR 213.9 and 49 CFR 307