The History of the Caboose

The use of cabooses started in the 1830’s when railroads housed trainmen in shanties built on boxcars or flatcars.  The addition of the cupola – the lookout post atop the car – is attributed to a conductor who discovered in 1863 that he could see his train much better if he sat atop boxes and peered through the hole in the roof of his boxcar.

The caboose served several functions, one of which was as an office for the conductor.  A printed ‘waybill’ followed every freight car from its origin to its destination.  The conductor kept the paperwork in the caboose.

The caboose also carried a brakeman and a flagman.  In the days before automatic air brakes, the engineer signaled the caboose with his whistle when he wanted to slow down or stop.  The brakeman would then climb out and make his way forward, twisting the brakewheels atop the cars with a stout club.  Another brakeman riding the engine would work his way toward the rear.  Once the train was stopped, the flagman would descend from the caboose and walk back to a safe distance with lanterns, flags, and other warning devices to stop any approaching trains.

Once underway, the trainmen would sit up in the cupola and watch for smoke from overheated wheel journals (called hotboxes) or other signs of trouble.

It was common for railroad to assign a caboose to a conductor for his exclusive use.  Conductors took great pride in their cars, decorating the interiors with many homey touches including curtains and family photos.  Since they could also cook meals in their cars, the caboose served as a home away from home.

In the 1880’s, the automatic air brake system, invented by George Westinghouse, eliminated the need for brakemen to manually set brakes.  The air brakes soon were followed by the use of electric track circuits to activate signals, providing protection for trains and eliminating the need for flagmen.  Friction bearings were replaced by roller bearings, reducing overheated journals and making visual detection by smoke an unlikely event.

Trains became longer, making it difficult for the conductor to see the entire train from the caboose, and freight cars became so high that they blocked the view from the traditional cupola.  The increasing heaviness and speed of the trains made on-board cooking hazardous and unnecessary.  New labor agreements reduced the hours of service required for train crews and eliminated the need for cabooses as lodging.  Cabooses, when used at all, were drawn from ‘pools’ and no longer assigned to individual conductors.

Eventually, electronic ‘hotbox’ and dragging equipment detectors, which would check moving trains more efficiently and reliably than men in cabooses, were installed along main lines, and computers eliminated the conductors’ need to store and track paperwork.
The Caboose’s Replacement

Today, the ends of freight trains are monitored by remote radio devices called Flashing, Red, End-of-train Device or "FRED".  The small boxes fit over the rear coupler and are coupled in to the train’s air brake line. 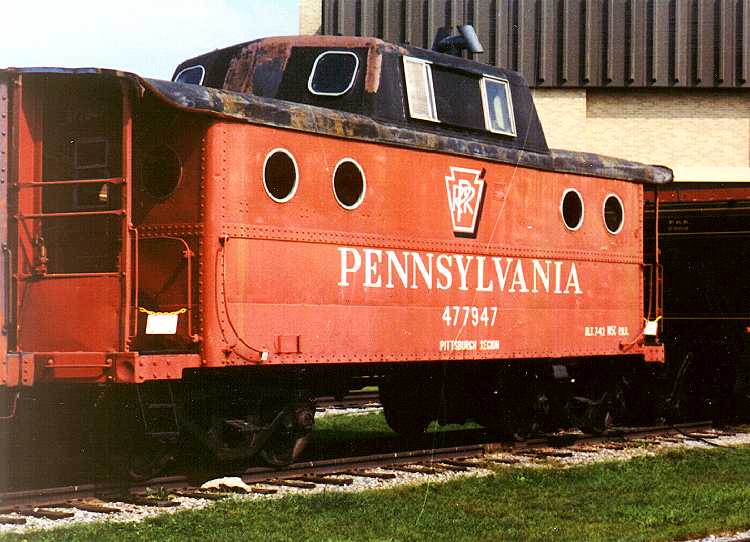