Although remembered mainly as a railroad, the Reading Company was, in its heyday, a multifaceted industrial giant.  Originally established as The Philadelphia & Reading Railroad (P & R) in 1833 to transport anthracite coal, the pioneering 94-mile line evolved into a mighty corporation serving eastern Pennsylvania, New Jersey and Delaware.  Operations included coal mining, iron making, canal and sea-going transportation and shipbuilding.  With its great complex of shops for locomotive and car building and repair, and constant advances in railroad technology, the company held a position of leadership in the railroad industry for over a century.

By the nature of the territory which it served, the P & R fueled the Industrial Revolution which led the United States to economic leadership.  With lines reaching out to the North, South, East and West, the P & R served the heart of the most densely industrialized area of the nation and by the 1870s became the largest corporation in the world.

During this period the P & R established a subsidiary, The P & R Coal and Iron Company, to gain control over the vast anthracite deposits being mined for shipment over its lines.  As one of America’s first conglomerates, this attracted the infamous “robber barons” of the latter 1800s, such as Carnegie and Vanderbilt.  During the company’s final spectacular attempt at expansion through control of lines to New England, Canada and the West, the formidable J. P. Morgan pulled the financial rug out from under The Reading, and forced the company to settle into its traditional role as a regional railroad – mainly a carrier of anthracite.

After World War II, as America began to turn away from coal as its major fuel, The Reading’s fate began to turn as well.  Dragged down by the failure of surrounding lines on which it depended for traffic to offset the loss of the coal business, The Reading entered bankruptcy in 1971.  Its operations were taken over as part of the federally financed CONRAIL, on April 1, 1976. 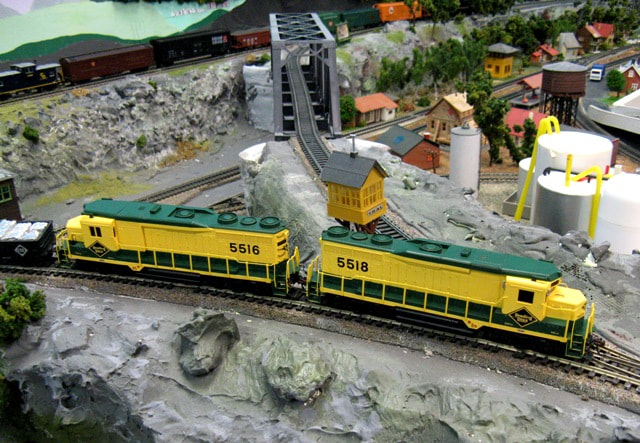 Models of Reading Railroad #5516 and #5518
In 1962, the Reading Company purchased 20 GP30 locomotives built by the Electro-Motive Division of General Motors Corporation, numbered them 5501 through 5520, and painted them in a distinctive green and yellow color scheme.  One of the series, number #5513, was placed on display for commuters inside the Reading Terminal in Philadelphia.

There were 948 GP30s built from 1961 to 1963.  It is believed that only about eight still survive and some are still working.  The Reading Company Technical & Historical Society owns #5513 and it is currently awaiting repair. 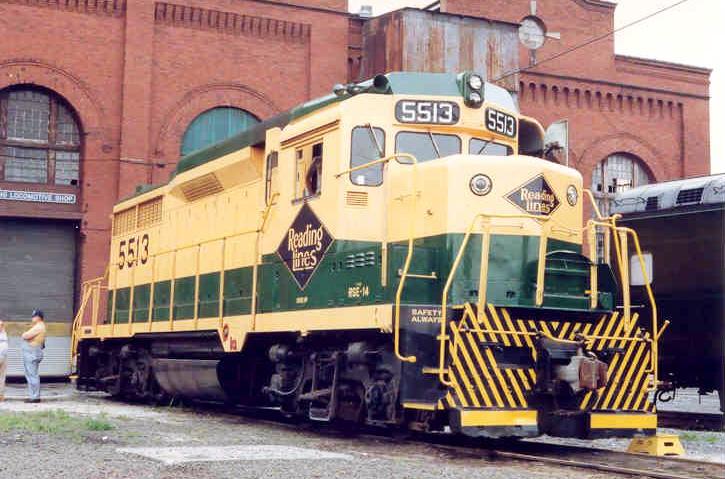