The Lehigh Valley Railroad dates back to the mid-1800’s and was sometimes known as the Route of the Black Diamond, named after the anthracite coal it transported.   The original purpose of its founders was to build a railroad for the transportation of anthracite and, incidentally perhaps, passengers between the mines then being operated near Mauch Chunk, Pa., and the Delaware River at Easton, Pa.

Almost immediately the railroad began to expand and by the 1890’s, the Lehigh Valley Railroad stretched from New York Harbor to Tifft Terminal in Buffalo, passing through the Lehigh Valley in Pennsylvania, and the Finger Lakes region of New York state.

By the mid -1900’s, the steam trains had been replaced with diesel locomotives.  Coal traffic declined steadily after the 1940s and, by 1962, the Pennsylvania Railroad had acquired majority stock control of the railroad.  On June 24, 1970, the Lehigh Valley Railroad declared bankruptcy, just three days following the bankruptcy of the Pennsylvania Railroad’s successor, Penn Central.  Penn Central’s bankruptcy relieved them from paying fees to various Northeastern railroads, the Lehigh Valley included, for the use of their railcars and other operations.  The non-payment of these fees was fatal to the Lehigh Valley’s finances.

The Lehigh Valley remained in operation during the 1970 bankruptcy, as was the common practice of the time.  In 1972, the Lehigh Valley assumed the remaining Pennsylvania trackage of the Central Railroad of New Jersey, a competing anthracite railroad which had entered bankruptcy as well.  In 1976, the assets of the bankrupt Lehigh Valley Railroad were acquired by Conrail. 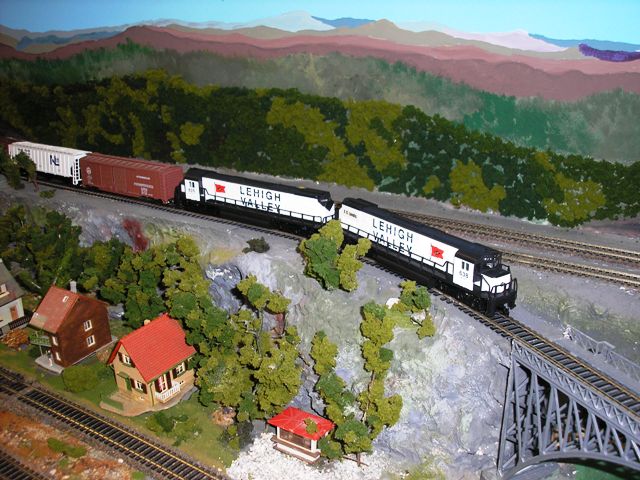 During Glenn’s early teenage years, he spent a lot of time after school with his father in the marshalling yards where the freight trains were put together for trips all over the country.  He also accompanied his father on passenger runs from Easton to Buffalo and Glenn developed a keen interest in everything about the railroad.  After a near accident on Glenn’s part when his foot slipped while he was climbing a ladder on a moving boxcar and came within inches of the wheel, his father discouraged any further thought about a railroad career.

His love of railroads never faded and Glenn took great pleasure in the Shannondell Model Railroad.  Look for the black and white locomotives which are fondly called ‘snowbirds’.